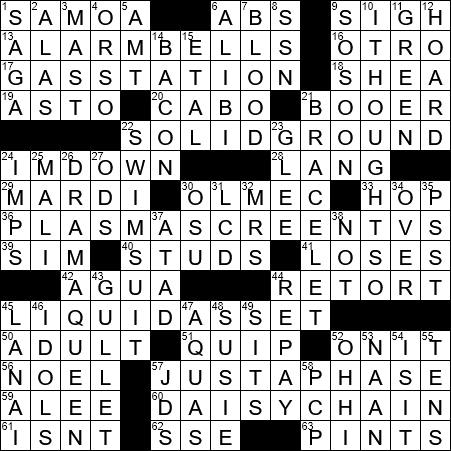 Themed answers each start with a PHASE, a state of matter:

Pago Pago is the capital of American Samoa in the South Pacific. The island was used by the US Navy during WWII and it managed to escape most of the conflict. The only military incident of consequence was the shelling of the city’s harbor by a Japanese submarine. A more devastating event was the tsunami that hit Pago Pago and surrounding areas in 2009, causing widespread damage and numerous deaths.

6 Muscles that get “crunched” in crunches : ABS

When I was a schoolkid, I was taught that there were three fundamental states of matter: solid, liquid and gas. I think it is now generally accepted that there is a fourth fundamental state matter, namely plasma. Plasma is a state without a definite shape or volume, and in that sense is similar to a gas. In a plasma, electrons have been ripped away from their nuclei, forming a conductive electron “sea”. Plasmas are created from gases by applying a massive voltage difference or an extremely high temperature.

The flowers of the daisy plant close tightly at sunset and then open up again in the morning. It is this behavior that led to the name “daisy”, from the Old English for “day’s eye”. So, the daisy could be called a “well-rested” plant. And, someone who is well-rested attacks the day “fresh as a daisy”. Interesting, huh?

Two pints make up a quart, which is a “quarter” of a gallon, hence the name.

7 Donation to the Red Cross : BLOOD

“Bacon” is an Old French word that we imported into English. The term ultimately comes from the Proto-Germanic “bakkon” meaning “back meat”.

23 Kind of club for singers : GLEE

We might call a little imp a “rapscallion”, an evolution from “rascallion” that in turn comes from “rascal”.

The lowest/least common denominator (LCD) of a set of fractions is the least common multiple of the denominators of those fractions. For example, the LCD of ⅓ and ¼ is 12 as both ⅓ and ¼ can be expressed in multiples of 1/12 (⅓ is 4/12 and ¼ is 3/12).

The esophagus is the gullet, the “pipe” that carries food from the mouth down into the stomach. The term comes from the Greek “oisophagos” that can be translated as “to carry to eat”.

According to the Book of Exodus in the Bible, Moses’ brother Aaron made a golden calf as an idol for the Israelites to worship while Moses was on Mount Sinai receiving the Ten Commandments. When Moses returned, he became angry on seeing the calf and destroyed it.

55 Bills with Alexander Hamilton on them : TENS