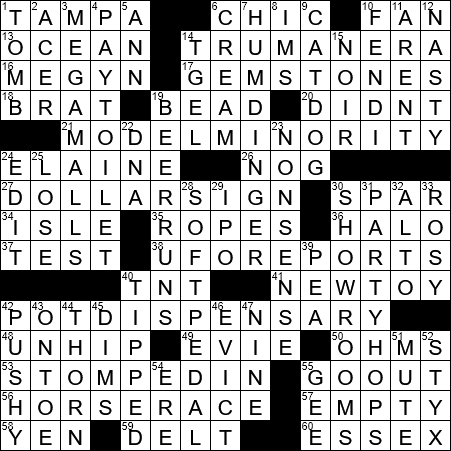 Constructed by: Brooke Husic & Sid Sivakumar
Edited by: Will Shortz

14 When NATO was formed : TRUMAN ERA

That might be a bead of sweat, for example.

That would be on a keyboard.

36 Feature in many depictions of Buddha : HALO

40 What was originally used as a yellow dye before its best-known property was discovered : TNT

Evie Sands is a singer from Brooklyn, New York. Sands is also a noted songwriter, having penned songs that have been recorded by the likes of Barbra Streisand, Gladys Knight, Karen Carpenter, Linda Ronstadt and Dusty Springfield.

59 Muscle that can be exercised by dumbbells, for short : DELT

The Essex Motor Company manufactured small and affordable cars in Detroit starting in 1918. Essex was actually a wholly-owned subsidiary of the Hudson Motor Company. Essex was dissolved in 1922, after which Hudson made the cars directly, continuing the Essex name until 1932.

3 They have many outlets : MEGAMALLS

A “lollapalooza” is something outstanding, one of a kind, as is a “dilly”.

11 Word that sounds like “orange” in a classic knock-knock joke : AREN’T

A thorn in the side (sometimes “thorn in the flesh”) is an idiom describing an irritant. The phrase comes from the Second Epistle to the Corinthians in the Christian Bible:

47 CB channel for emergency use : NINE