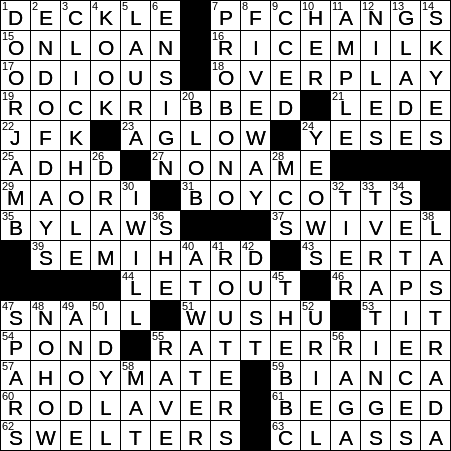 Deckle edge paper is paper with a feathered edge as opposed to a cut edge. Deckle edge paper is used nowadays when producing a book to create a retro feel. Deckle edges were unavoidable in the early days of bookbinding when individual pages were made by hand from a paper pulp slurry in a deckle frame, hence the name.

The Idlewild Golf Course was taken over by the city of New York in 1943 and construction started on a new airport to serve the metropolis and relieve congestion at LaGuardia. The Idlewild name still persists, even though the airport was named after Major General Alexander E. Anderson from the first days of the project. When the facility started operating in 1948 it was known as New York International Airport, Anderson Field. It was renamed to John F. Kennedy International Airport (JFK) in 1963, one month after the President was assassinated.

The haka is a war dance used by the Maori people of New Zealand. Famously, the New Zealand rugby team performs a haka before each of their matches.

“Boycott” is another word given to the world by the Irish! Englishman Captain Charles Boycott found himself on the wrong side of a local community in County Mayo in the west of Ireland, and in a concerted campaign he was refused service by all around him. His name lives on …

Gruyère is a hard cheese that is named for the medieval Swiss town of Gruyères. I had the pleasure of visiting Gruyères many years ago, and have very fond memories of stuffing myself with the most delicious fondue made from the local cheese mixed with wine …

Snail mail is regular mail delivered by the postal service. The term “snail mail” arose as email gained in popularity, and is a reference to the difference in speed between email and paper mail.

The rat terrier is known as a farm dog, and was especially common on farms in the twenties and thirties. The breed has a great reputation as a hunting companion and for controlling vermin.

1 Part of a frame : DOORJAMB

According to the Bible’s Book of Revelation, there will be a gathering of armies and a great battle during the “end of days”, and that battle between good and evil will take place at Armageddon.

“The Onion” is a satirical news network, with a print newspaper and a heavy online presence. “The Onion” newspaper was founded by two college students at the University of Wisconsin-Madison in 1988. The founders sold the operation a year later for about $20,000. The paper grew steadily until 1996 when it began to publish online and really took off. I think it’s worth a tad more than $20,000 today …

12 Sitcom husband (and then ex-husband) of Maris Crane : NILES

“La Strada” is a 1954 drama movie from Italy directed by Federico Fellini and starring Anthony Quinn. Quinn plays a strongman who makes a living as an itinerant strongman, performing “on the road”. “La Strada” translates into English as “the road”.

Lee Atwater was a Republican strategist, an advisor to Presidents Reagan and George H. W. Bush, and also a Chairman of the Republican National Committee. Atwater collapsed at a fundraiser for Senator Phil Gramm in 1990, and soon after was diagnosed with a brain tumor. He died a year later, at just 40 years of age.

In the world of computing, a router is a device that helps direct traffic, as it were. A router in a house is often found in combination with a modem, and directs traffic between the Internet and the computers in the home.

49 What a current flows into : ANODE

52 Archangel of the Apocrypha : URIEL

Uriel is one of the archangels in the Jewish and Christian traditions. Uriel makes a few notable appearances in literature: in John Milton’s epic poem “Paradise Lost” and in Ralph Waldo Emerson’s poem “Uriel”.