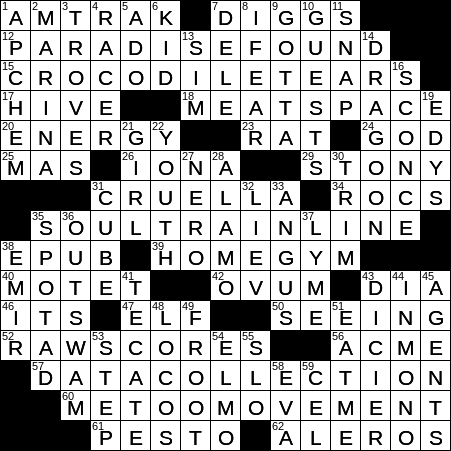 “Más o menos” translates from Spanish as “more or less”.

Although the small island of Iona lies just off the west coast of Scotland, it was the site of a monastery built in the Middle Ages by a monk from Ireland named Colm Cille (also known as Columba). Colm Cille and his followers were sent into exile from the Irish mainland and settled in Iona, as at that time the island was part of an Irish kingdom. This monastery in Iona expanded its influence over the decades and founded other institutions all over Ireland and Great Britain. It is believed that the famous Book of Kells may have been written, or at least started, at the monastery on Iona. Iona is also the burial site for Macbeth, King of Scotland who was immortalized in Shakespeare’s fictional account of the king’s life.

“Soul Train” is a musical variety show featuring mainly R&B, soul and hip hop artists that originally aired from 1971 to 2006. “Soul Train” was the longest-running, nationally syndicated television show in history, with more than 1,100 episodes. “Entertainment Tonight” and “Wheel of Fortune” come in second and third place in that “race”, and they are still being aired.

EPUB is a standard format used in the publishing of e-books. Books in the EPUB file format have the extension “.epub”.

60 Global justice phenomenon sprung from a 2006 Myspace post by Tarana Burke : ME TOO MOVEMENT

The Oldsmobile Alero was the last car made by General Motors under the Oldsmobile brand. It was produced from 1999 to 2004.

1 H.S. course whose textbooks are full of solutions : AP CHEM

7 Strike at a newspaper office? : DELE

13 Kind of card in cellphones : SIM

Liev Schreiber is highly regarded as a stage actor, and has many classical roles under his belt. He won a Tony in 2005 for his Broadway performance in “Glengarry Glen Ross”, and earned excellent reviews for his performance in Shakespeare’s “Cymbeline”.

Tecate is a Mexican beer that takes its name from the city of Tecate in Baja California. Tecate is a brand produced by Cuauhtémoc Moctezuma Brewery, along with beers such as Dos Equis, Bohemia and Carta Blanca.

49 Cereal box word whose third and fourth letters are stylized as bits of cereal : FROOT

51 Instruction to Alice : EAT ME