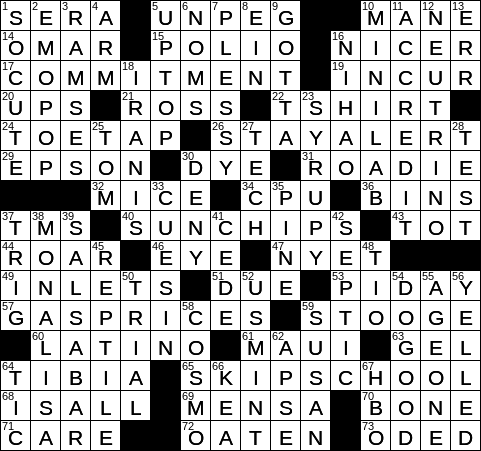 Constructed by: Yacob Yonas & Chad Horner
Edited by: Will Shortz

Themed answers are words or phrases that require us to SKIP the SCHOOL hidden within to make sense of the clue:

The first politburo was formed by the Bolshevik Party in Russia in 1917, during that year’s Russian Revolution. The name is a contraction of “Politicheskoe Byuro” meaning “Political Bureau”. The original politburo had seven members, including Vladimir Lenin, Leon Trotsky and Joseph Stalin.

65 Emulate Ferris Bueller … or a hint to understanding the answers to the starred clues : SKIP SCHOOL

12 Subatomic particle with a mass close to zero : NEUTRINO

16 “Hello,” in the world’s most common first language : NI HAO

“Farsi” is one of the local names used for the Persian language.

37 A lecture on it might be full of tangents : TRIG

Mint marks are inscribed on coins to indicate where the coin was minted. In the US, the current mint marks are:

Cosmo Kramer is the outrageous character played by Michael Richards on “Seinfeld”. “Seinfeld” co-creator, Larry David, introduced Kramer into the story, basing the character on real-life comedian Kenny Kramer who used to live across the hall from him.

Susan Stamberg is a news correspondent for National Public Radio, and occasional host of the program “Weekend Edition Saturday”. Back in 1972 Stamberg was made co-host of the news magazine show “All Things Considered”, making her the first female host of a national news broadcast.