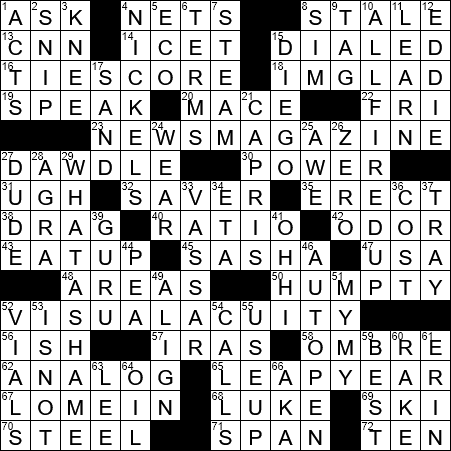 Today’s Theme (according to Bill): This Year

The game of badminton was developed in the mid-1700s by British military officers in India. There was already an old game called battledore and shuttlecock, so the creation of badminton was essentially the addition of a net and boundary lines for play. The game was launched officially as a sport in 1873 at Badminton House in Gloucestershire in England, hence the name that we now use.

Anderson Cooper is a respected news personality on CNN and on various shows around the dial. Among my favorite appearances of his, although he would call them trivial I am sure, was as host of a great reality game show called “The Mole” that aired in 2001. Cooper’s mother was fashion designer Gloria Vanderbilt.

I wasn’t sure of the origin of the term “leap year”, and when I checked I found it to be fairly obvious. As a reference, let’s use March 25, 2007, a Sunday. The year before, in 2006, March 25th fell one weekday earlier on a Saturday. That follows the rule that any particular date moves forward in the week by one day, from one year to the next. However, the next year (2008) has an extra day, February 29th. So March 25, 2008 falls on a Tuesday, “leaping” two weekdays forward, not one, as 2008 is a “leap” year. I think I am more confused now then when I started this paragraph …

The Gospel According to Luke is the longest of the four Gospels in the Bible. Some well-known stories are unique to Luke, and do not appear in the Gospels of Matthew, Mark nor John. A couple of examples would be “The Prodigal Son” and “The Good Samaritan”. It is believed that the author of the Gospel of Luke was the same person who wrote “Acts of the Apostles”.

8 Kind of card in a smartphone : SIM

12 ___ Redmayne, Oscar winner for “The Theory of Everything” : EDDIE

English actor Eddie Redmayne played mainly supporting roles, such as Marius Pontmercy in 2012’s “Les Misérables”, until he wowed the world portraying Stephen Hawking in “The Theory of Everything”. A few years later, Redmayne played Lili Elbe in “The Danish Girl”, and then Newt Scamander in the Harry Potter spinoff “Fantastic Beasts and Where to Find Them”.

“The Theory of Everything” is a 2014 biographical film that tells the life story of theoretical physicist Stephen Hawking. Eddie Redmayne portrays Hawking, in a performance that earned him an Academy Award for Best Actor. Stephen Hawking himself was very supportive of the film, and even provided his own electronic “voice” for the latter part of the movie.

Capri pants first became popular on the island of Capri, apparently. They were invented in Europe in 1948, but only became stylish in the US in the sixties. Mary Tyler Moore often wore Capri pants on “The Dick Van Dyke Show” and to some extent she sparked a fashion trend. After a lull in the seventies and eighties there was a resurgence in sales after Uma Thurman wore them (and danced in them) in “Pulp Fiction”.

61 Andrews of “Dancing With the Stars” : ERIN

Erin Andrews is a sports reporter. I don’t watch much in the line of sports but I do know Ms. Andrews for her appearances on “Dancing with the Stars” in 2010. She did quite well and made it to the final of the show. And then she was hired as the show’s co-host alongside Tom Bergeron.