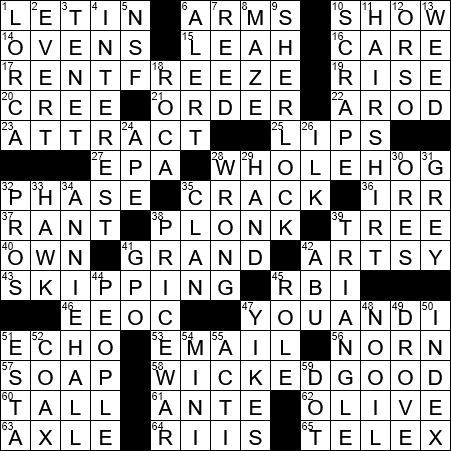 When the incredibly successful sitcom “Friends” was in development it was given the working title “Insomnia Cafe”. This was changed to “Friends Like Us”, before finally going to air as “Friends”.

19 What yeast makes dough do : RISE

20 One of the First Nations of Canada : CREE

“First Nations” is a term used in Canada describing the ethnicity of Native Americans who are neither Inuit nor Métis people.

51 Where to find Amazon’s Alexa : ECHO

Our word “missive”, which is used for a written message or letter, comes from the Latin “mittere” meaning “to send”.

The Norns were female goddesses in Norse mythology. These female deities ruled the destiny of men. Sure, hasn’t it always been that way? Just kidding!!

58 Positive, albeit terse, review of a 2003 Broadway musical? : WICKED GOOD

65 Kind of message made obsolescent by faxes : TELEX

Telex grew out of the world of the telegraph. What Telex brought to telegraphy was the ability to route messages. Instead of having to talk to an operator to route a particular message to the intended party, the user of a telex could route the message directly to another telex machine by way of a rotary dial, one very similar to that on a telephone.

2 Chris in the International Tennis Hall of Fame : EVERT

Almond Roca is a brand of chocolate-covered toffee that has a coating of ground almonds, and was invented in 1923.

The celebrated 1987 film “Dirty Dancing” stars Patrick Swayze and Jennifer Grey, who were both relative unknowns at the time of filming. “Dirty Dancing” had a relatively low budget but was destined to earn over $200 million. It became the first movie to sell more than a million copies on home video. There was a prequel made in 2004 called “Dirty Dancing: Havana Nights”, that wasn’t a good film at all. Patrick Swayze was paid $200,000 for his 1987 performance, and received $5 million to make a cameo in the prequel.

I suppose if there is any Woody Allen movie that I enjoy watching, it’s “Annie Hall” from 1977. I think Diane Keaton is a great actress and she is wonderful in this film. You’ll see Paul Simon as well, making a rare movie appearance, and even Truman Capote playing himself. The film is also famous for sparking a movement in the fashion world to adopt the “Annie Hall” look, that very distinctive appearance championed by the Annie Hall character.

Pointillism is a style of painting that grew out of Impressionism. The pointillist technique calls for the artist to use small, distinct dots of bold color to build up the image. Pointillism was developed in the late 1800s by the great French painter, Georges Seurat. You can go see his magnificent work “A Sunday Afternoon on the Island of La Grande Jatte” at The Art Institute of Chicago the next time you’re in town.