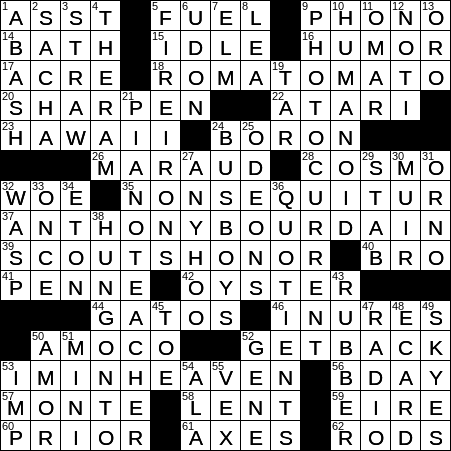 “Phonograph” was an early name for what became known as a “gramophone” and later “record player”. Famously, the phonograph was invented in 1877 by Thomas Edison.

24 Element that burns with a green flame : BORON

“Cosmopolitan” magazine was first published way back in 1886! It started out life as a family magazine, then as a literary publication. “Cosmo” took its present form as a women’s magazine in the 1960s.

We use the Latin term “non sequitur” to describe an illogical statement, usually irrelevant to what has immediately preceded. The literal translation of “non sequitur” is “it does not follow”.

37 Author/TV personality who wrote “Your body is not a temple, it’s an amusement park” : ANTHONY BOURDAIN

42 The world, to ambitious types : OYSTER

The oft-used idiom “the world is your oyster” suggests that you are in a position to take advantage of all that life has to offer. This is yet another phrase that was coined by playwright William Shakespeare, in “The Merry Wives of Windsor”.

Falstaff: I will not lend thee a penny.
Pistol: Why then the world’s mine oyster/Which I with sword will open.

“Amoco” is an abbreviation for “American Oil Company”, an oil company that merged with BP in 1998. Amoco was the first oil company to introduce gasoline tanker trucks and drive-through filling stations. I wonder if they know what they were starting …?

52 Beatles hit about “a man who thought he was a loner” : GET BACK

“Amhrán na bhFiann” is Irish for “The Soldiers’ Song”, and is the name of the Irish national anthem. I got this one pretty quickly …

Omar Khayyam was a Persian with many talents. He was a poet as well as an important mathematician, astronomer and physician. A selection of his poems were translated by one Edward Fitzgerald in a collection called “Rubáiyát of Omar Khayyam”. Here are some famous lines from that collection:

Here with a Loaf of Bread beneath the Bough,
A Flask of Wine, a Book of Verse — and Thou
Beside me singing in the Wilderness —
And Wilderness is Paradise enow.

30 “Studies in the Sierra” author : MUIR

The quotient is the result one gets when dividing one number by another. The term “quotient” comes from the Latin “quotiens” meaning “how many times”.