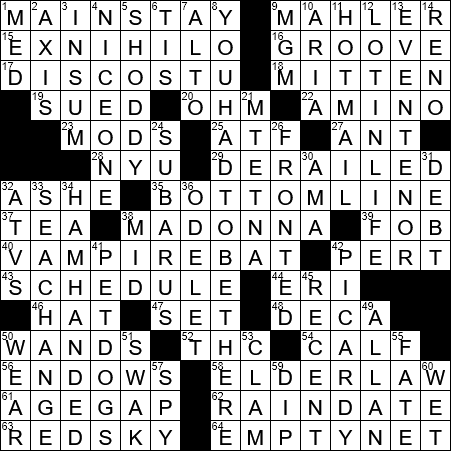 15 From nothing, as Creation : EX NIHILO

17 “The Simpsons” character in sunglasses and platform shoes : DISCO STU

38 The top Hot 100 solo artist of all time, per Billboard : MADONNA

O. Henry’s short story called “The Gift of the Magi” was first published in 1905. It tells of relatively poor, newly-married couple who want to buy each other a gift for Christmas. The wife’s pride and joy is her long blonde hair, while the husband’s most treasured possession is his grandfather’s gold pocket watch. The wife sells her hair to buy her gift, and the husband sells his watch to buy his gift for his spouse. The wife is given a set of combs, hair accessories that are useless now that her hair is short. The husband gets a platinum fob chain for the watch that he no longer owns.

Vampire bats feed mostly in the blood of mammals, including humans. When they find a suitable “victim”, often one that is asleep, the bat usually lands close by and approaches its “meal” on the ground. It makes a small cut with its razor-sharp teeth and laps up the blood. The blood tends to flow freely as the bat’s saliva contains anticoagulants. Reports of bats biting the neck of humans are very rare in the real world, but the neck is the preferred location of attack in the fantasy world of vampires.

That would be Schedule A included in an income tax return.

Mahalia Jackson was an African-American gospel singer who was known as the first Queen of Gospel Music. She recorded many records, including 12 that went gold, i.e. sold more than a million copies each.

Hotmail was introduced in 1996 and was one of the world’s first webmail services. Webmail is an email service in which the emails are stored remotely on a server, rather than on a user’s own computer. Hotmail was acquired by Microsoft in 1997, and was replaced by Outlook.com in 2013.

21 What’s found on a couple of plates in Italy? : MT ETNA

Subaru is the automobile division of Fuji Heavy Industries, Japanese conglomerate. “Subaru” is the Japanese name for the Pleiades star cluster. As a result, the Subaru logo is also a cluster of stars.

A “sea change” is a change of great significance. The phrase was coined by William Shakespeare in “The Tempest”. The full quotation is:

Full fathom five thy father lies,
Of his bones are coral made,
Those are pearls that were his eyes,
Nothing of him that doth fade,
But doth suffer a sea-change,
into something rich and strange,
Sea-nymphs hourly ring his knell,
Ding-dong.
Hark! now I hear them, ding-dong, bell.

“SWAK” is an initialism standing for “sealed with a kiss”. SWAK, and the related SWALK (sealed with a loving kiss), are postal acronyms that originated during WWII.

“Clam” is a slang term for “dollar”. It has been suggested that “clam” is a throwback to the supposed use of clams as units of currency in ancient cultures.

The International Spy Museum in Washington, D.C. is a private enterprise that opened in 2002. It was founded by Milton Maltz, a former code-breaker during the Korean War. The Spy Museum is a fun place to visit …