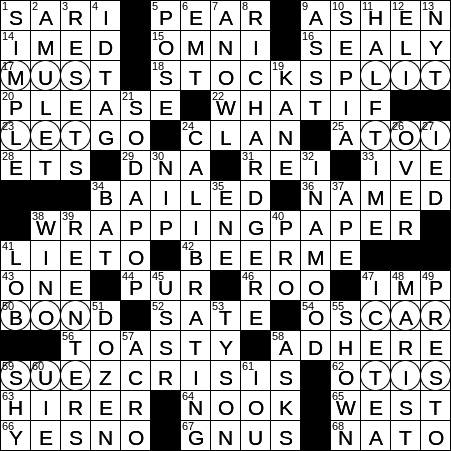 Four rows in the grid each include 6 circled letters. When “WRAPPED”, from the right of the grid around to the left, those letters spell out a kind of PAPER. These are:

5 Tree for a partridge, in a Christmas song : PEAR

Pur is a brand of water filters and related products that was sold to Procter & Gamble in 1999, and sold on again to Helen of Troy Limited.

An imbroglio is a difficult or tangled situation. As one might expect, “imbroglio” comes to us from Italian. The Old Italian word “imbrogliare” means to tangle or confuse.

10 Tone of some old photos : SEPIA

12 One of the Manning brothers : ELI

“The Dirty Dozen” is a very entertaining 1967 WWII movie that is based on a 1965 novel of the same name by E. M. Nathanson. In turn, the novel was inspired by a real-life military unit nicknamed “the Filthy Thirteen”. The latter were a demolition unit in the 101st Airborne Division whose mission was to destroy targets behind enemy lines. The movie had quite the cast, led by Lee Marvin and supported by Ernest Borgnine, Charles Bronson, Telly Savalas and Donald Sutherland, as well as football player Jim Brown and singer Trini Lopez.

59 Not comfortable with the limelight : SHY

Limelight was an early form of stage lighting that was also known as Drummond Light. The illumination came from the burning of quicklime (calcium hydroxide), hence the name. Although limelights are a thing of the past, the term “in the limelight” is still used when describing someone in the public eye.