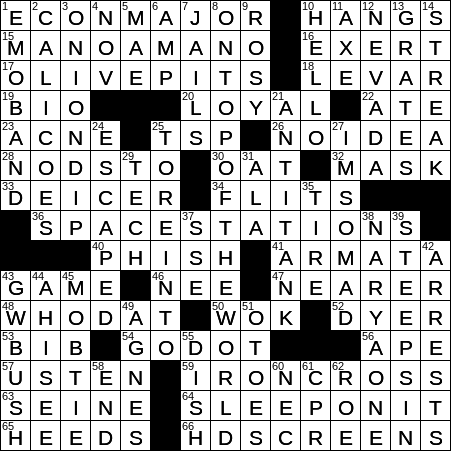 In North America, calico is a brightly printed cloth made from cotton material. Over on the other side of the Atlantic, calico is a plain white cotton cloth.

Even when I was a kid living in England in the 1960s, we would make up an effigy of Guy Fawkes to parade around the streets in the runup to Guy Fawkes Day, November 5th. Guy Fawkes was the man who led the Gunpowder Plot to blow up the British king and Parliament on November 5, 1605. We kids would use the effigy to raise money from strangers by approaching them with the phrase “penny for the guy”. The money collected was used to buy fireworks that we’d shoot off on Bonfire Night, the name given to the evening of Guy Fawkes Day. The effigy known as “the guy” gave rise in the UK to the use of “guy” to describe a poorly-dressed man. By the mid-1800s, the term “guy” was adopted into American-English to mean simply “fellow”.

6 Boomer at a concert : AMP

43 Prez with the same initials as an N.Y.C. landmark : GW BUSH

49 ___ Scott College, one of the Seven Sisters of the South : AGNES

Agnes Scott College is a private school in Decatur, Georgia. It is a liberal arts women’s college.

Chiwere is a Siouan language spoken by the Otoe people, as well as by the Missouria and Iowa.