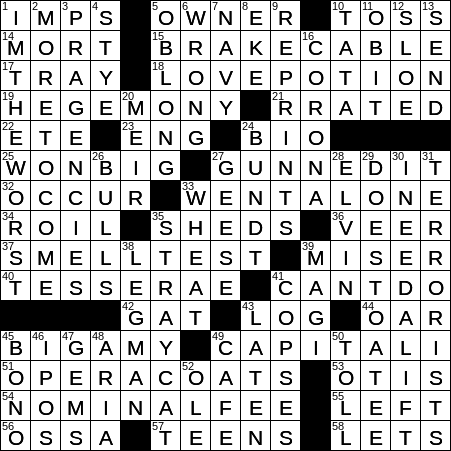 42 One might be loaded in a getaway car : GAT

“Bigamy” means having two wives or husbands at the same time. The term comes from the Latin “bigamus” meaning “twice married”.

49 It’s found at the start of this clue : CAPITAL I

There is a capital letter I at the start of the word “It’s”.

Brocade is a very decorative fabric usually made from silk and often incorporating gold and silver thread. The name “brocade” comes from the Italian word “broccato” meaning “embossed cloth”.

4 Concern for an ophthalmologist : STYE

The word “oblong” comes from the Latin “oblongus” which means “somewhat long”.

12 Plant of the genus Prunus : SLOE

26 Organization that Jordan was once part of : BULLS

Elvin Hayes is a retired professional basketball player. In 1966, along with Don Chaney, Hayes became the first African American to play for the University of Houston. Hayes didn’t finish college, instead opting for a 16-year career in the NBA. When he retired from the game in 1984, he went straight back to the University of Houston and finished his degree. Well done, Elvin, is what I say …

The US Special Forces unit that is popularly referred to as SEAL Team Six, is more correctly known as the US Naval Warfare Development Group (NSWDG). “SEAL Team Six” was actually the name of the unit’s predecessor, which was disbanded in 1987. The original group was created soon after the Iran hostage crisis of 1979. Two SEAL teams were deployed, and the name SEAL Team Six was used as a ruse in order to confuse the Russian intelligence services about the actual number of teams in existence.

39 Trio in a Christmas carol : MAGI

“Vissi d’arte” is an aria from Puccini’s “Tosca” that is sung by the title character Floria Tosca. The title translates from Italian as “I lived for art”.