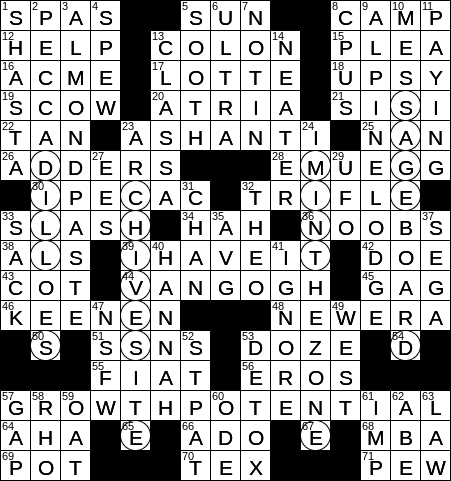 Constructed by: Matthew Sewell & Jeff Chen
Edited by: Will Shortz

Note that I solved the puzzle online, and so the numbering in my grid goes awry towards the bottom. Black squares define four POTS at the bottom of the grid. Inside those POTS are the letters SEED. That SEED GROWS into DILL, CHIVES, MINT and SAGE, in circled letters above the pots:

“Upsy-daisy” is an interjection sometimes used when lifting up a child. It’s “baby talk”, words of reassurance.

Ashanti Douglas is an American R&B singer who uses just “Ashanti” as her stage name.

The ALS Ice Bucket Challenge is a viral phenomenon in which participants are challenged to be filmed having a bucket of ice water poured over their heads. Each participant then gets to nominate up to three other people to do the same. Usually the nominees are given a day or two to comply, but can make a charitable donation is they want to avoid the icy shower. Happily, many participants opt to take the challenge, and also make a donation.

46 One of the Wayans brothers : KEENEN

Keenen Ivory Wayans is a member of the Wayans family that is so very successful in the world of entertainment. Keenen is perhaps best known for sketch comedy show “In Living Color” that ran from 1990 to 1994. Keenen created wrote and starred in the show with his brother Damon Wayans. Keenen also directed the horror comedy film “Scary Movie”, which was co-written by two other brothers, Shawn and Marlon Wayans.

54 Son of Aphrodite and Ares : EROS

A soothsayer is someone who claims to have the ability to predict the future. The term comes from “sooth”, an archaic word for “truth”. So a soothsayer was supposedly one who told the “truth” (about the future).

“Après-ski” is a French term meaning “after skiing”. It refers to the good times to be had after coming off the slopes.

10 Where trolls may lurk : MESSAGE BOARD

27 Many Caltech grads, for short : EES

“Shanghai Noon” is a comedy released in 2000 that is a melding of the movie genres western, kung-fu and comedy. The stars are Owen Wilson and Jackie Chan. The film’s title is a pun on the classic western film “High Noon”.

56 Fraternity letter that’s a homophone of where fraternities might be found : RHO