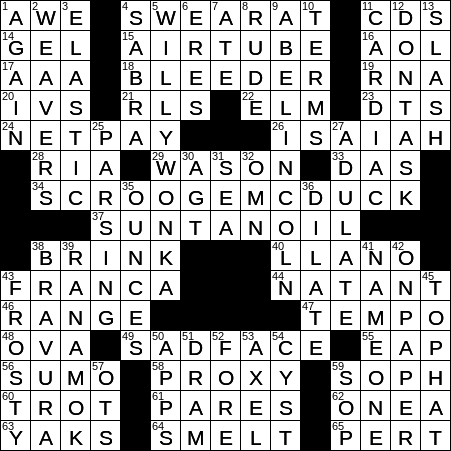 We have some grid art today, with a TOP HAT depicted in the lower-middle part of the grid. Themed answers are people who are known for wearing TOP HATS:

Ribonucleic Acid (RNA) is an essential catalyst in the manufacture of proteins in the body. The genetic code in DNA determines the sequence of amino acids that make up each protein. That sequence is read in DNA by messenger RNA, and amino acids are delivered for protein manufacture in the correct sequence by transfer RNA. The amino acids are then formed into proteins by ribosomal RNA. An added complication is that small changes in the sequence of amino acids specified by DNA sometimes takes place in a process known as RNA editing. This RNA editing occurs after the nucleotide sequence has been transcribed from DNA, but before it is translated into protein.

26 Book after Song of Solomon : ISAIAH

The Book of Isaiah is part of the Hebrew Bible and the Christian Old Testament. Isaiah is not mentioned in the Qur’an, but many Muslim scholars consider Isaiah a prophet. Isaiah is widely regarded as the most eloquent of the prophets, earning him the moniker “Shakespeare of the Prophets”.

A lingua franca is a common language used to communicate among those who do not routinely speak each other’s native tongue. The term “lingua franca” originally applied to the common language used in commerce around the Eastern Mediterranean from the Middle Ages through the Renaissance. This ancient Lingua Franca was a simplified form of Italian, with a generous sprinkling of loanwords from Greek, French, Portuguese, Spanish and other local languages.

Something described as natant is floating or swimming. The term “natant” come from the Latin “natare” meaning “to swim”.

56 Sport that takes place in a dohyo : SUMO

58 Kind of vote for a shareholder : PROXY

Weavers are small birds related to finches. Weavers are so called because they are known to weave the most elaborate nests of any bird.

The elastic cord known as bungee cord is also known as shock cord. The term “bungee” probably comes from Britain where it was schoolboy slang for “rubber eraser”, and likely came from the words “bouncy” and “spongy”.

9 *U.S. leader who said “Do I not destroy my enemies when I make them my friends?” : ABE LINCOLN

“Omni” is Latin for “all”, or “every” in the context of a medical prescription. On a prescription, “omni” is usually abbreviated to “omn”.

“Frosty the Snowman” is a song that was first ecorded by Gene Autry, in 1950. The song was specifically written in the hope that it would become a follow-up hit to Autry’s “Rudolph the Red-Nosed Reindeer” that topped the charts the previous year.

45 Something worn by the answer to each starred clue, as represented graphically in this puzzle’s grid : TOP HAT