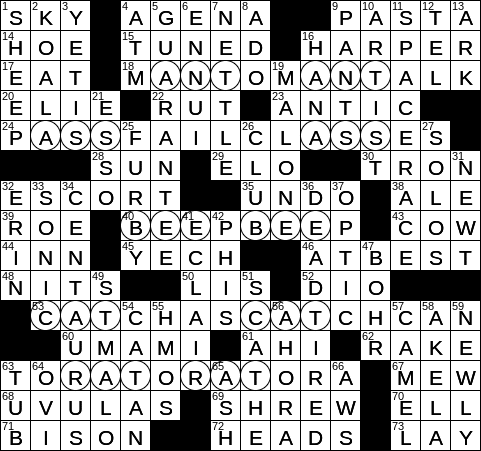 Themed answers each include two occurrences of the same animal as hidden words (using circled letters in the grid):

60 Taste that is neither sweet nor salty nor sour nor bitter : UMAMI

69 Animal in a Shakespearean title : SHREW

1 Animal in an insomniac’s count : SHEEP

People with insomnia might count sheep as an aid to falling asleep.

Artist Paul Klee was born in Switzerland, but studied art in Munich in Germany. You can see many of Klee’s works in the San Francisco Museum of Modern Art. If you get to Bern in Switzerland, even more of them can be seen at the Zentrum Paul Klee that was opened in 2005. Klee’s most celebrated work is his pointillist painting from 1932 called “Ad Parnassum”, which is owned by the Kunstmuseum, also located in Bern.

13 Holder of the contents of the circled squares? : ARK

On the sitcom “Cheers”, bartender Sam Malone was played by Ted Danson. Malone was a retired relief pitcher for the Boston Red Sox, and a recovering alcoholic. Great show …

Sonic the Hedgehog is a title character in a videogame and the mascot of Sega, the computer game developer. Sonic was set up as a rival to Nintendo’s mascot “Mario”.

49 Walled city on the coast of France : ST-MALO

Saint-Malo is a walled port city in Brittany in the northwest of France. Saint-Malo was a fortified island in the Middle Ages, and became home to French privateers and pirates in the 1800s, much to the chagrin of the British on the other side of the English Channel.

54 Trading board game with “settlers” : CATAN

57 Animal on a cigarette pack : CAMEL

Akela is the wolf in the “Jungle Book” by Rudyard Kipling. He gave his name to a cubmaster in the scouting movement, who is now known as “Akela”.