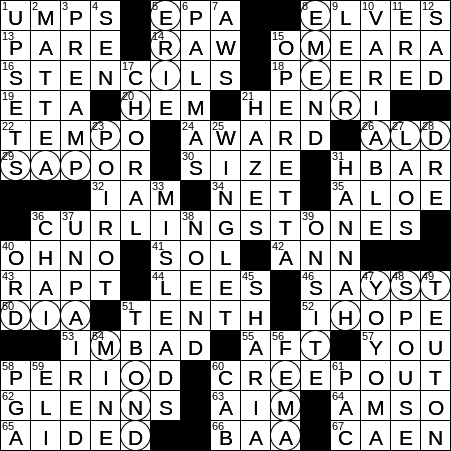 Four sets of circled letters in today’s grid spell out the names of precious STONES:

“I am” translates into French as “je suis”, and into Spanish as “yo soy”.

36 Items guided by brooms in the Winter Olympics … or a hint to this puzzle’s theme : CURLING STONES

Famously, Glenn Miller signed up with the US Air Force Band during World War II, and disappeared while flying from the South of England to entertain troops that had just liberated Paris. Miller is still listed as missing in action …

Caen, on the River Orne, lies in the Calvados department of France in the northwest of the country. Caen is famous for the WWII Battle of Caen that left the town practically destroyed. Caen is also the burial place of the Norman King William I of England, also known as William the Conqueror after his victory at the Battle of Hastings in 1066.

2 Kathy with the #1 country hit “Eighteen Wheels and a Dozen Roses” : MATTEA

Kathy Mattea is a country singer who grew up just outside Charleston, West Virginia. Many of Mattea’s songs were written by her husband Jon Vezner.

In a home audio system, one might have a preamplifier (preamp) and a power amplifier. In such an arrangement, the preamp isn’t really an amplifier at all as it does not amplify a signal or sound. The amplification task is left to the power amplifier, and the preamp serves as a switch between signal sources (cable box, CD player, DVD player etc.).

4 Many a pres. candidate : SEN

45 Islamic law based on the Quran : SHARIA

The Germanic peoples of Northern Europe are often called Teutonic, a term which originated with the Teutons, one of the Germanic tribes that lived in the region in the days of ancient Greece and Rome.