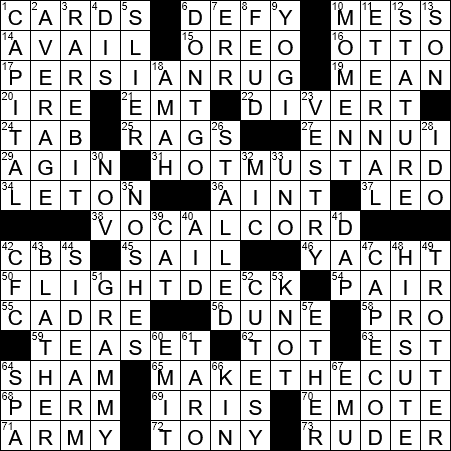 Themed clues each end with something that can be CUT:

Otto Preminger was noted for directing films that pushed the envelope in terms of subject matter, at least in the fifties and sixties. Great examples would be 1955’s “The Man with the Golden Arm” that dealt with drug addiction, 1959’s “Anatomy of a Murder” that dealt with rape, and 1962’s “Advise and Consent” that dealt with homosexuality. If you’ve seen these films, you’ll have noticed that the references are somewhat indirect and disguised, in order to get past the censors.

To cut a rug is to dance. The etymology of “cut a rug” isn’t clearcut (pun!), but the wear caused by repeatedly dancing on a rug seems to be the culprit in one form or another.

The expression “to cut the mustard” means “to meet expectations”. Apparently, the origins of the phrase are unclear, but some suggest it may come from “cut the muster”. But “cut the muster” has a very different meaning, i.e. “not turn up for a military parade”. I’ve also heard people use “cut the mustard” and “not pass muster” interchangeably. It’s all so confusing …

The vocal cords are also known as the vocal folds, and are two folds of mucous membrane that project into the larynx. The folds vibrate when air passes through the larynx, allowing sounds to be made.

50 Where planes land on an aircraft carrier : FLIGHT DECK (giving “cut the deck”)

That would be cutting a deck of cards.

Our word “bogus”, meaning “not genuine” was coined (pun!) in the 1830s, when it applied to counterfeit money.

“Amah” is an interesting word in that we associate it so much with Asian culture and yet the term actually comes from the Portuguese “ama” meaning “nurse”. Ama was imported into English in the days of the British Raj in India when a wet-nurse became known as an amah.

A vestry is where a priest dresses for services. Like so many English words, “vestry” came into our language via Anglo-Norman, from the Latin “vestarium” meaning “wardrobe”.

49 Horse in a harness race : TROTTER

51 Award from the Recording Academy : GRAMMY

53 One nautical mile per hour : KNOT

A knot (kt.) is a unit of speed equal to one nautical mile per hour. Traditionally a vessel’s speed was determined by using a “chip log”. A chip log is made up of a wooden board attached to a line wrapped around a reel. The line (called a “log-line”) had knots tied in it at uniform spacings. To determine the vessel’s speed the board was thrown overboard and the line allowed to unroll. The speed was then the “number of knots” paid out in a fixed time interval.

The corm of some taro plants is used to make poi, a traditional Hawaiian dish (that I think tastes horrible). When a taro plant is grown as an ornamental, it is often called Elephant Ears due to the shape of its large leaves.