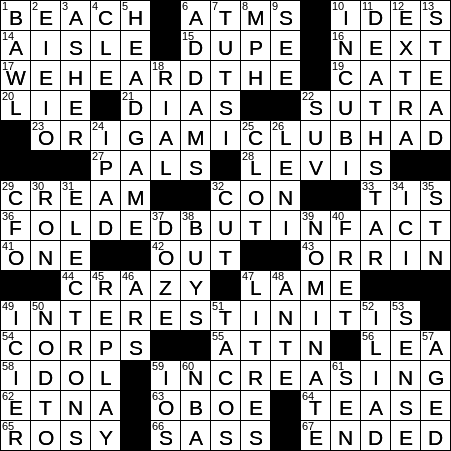 In Act I of William Shakespeare’s “Julius Caesar”, a soothsayer warns the doomed emperor to “beware the ides of March”. Caesar ignores the prophecy and is subsequently killed on the steps of the Capitol by a group of conspirators on that fateful day.

41 With 42-Across, usual result of a leadoff batter getting three strikes : ONE …

Orrin Hatch is a former Republican Senator from Utah. Hatch is also quite the musician, and plays the piano, violin and organ. He has composed various compositions, including a song called “Heal Our Land” that was played at the 2005 inauguration of President George W. Bush.

2 Letters from down on the farm? : EIEIO

“My Name Is Asher Lev” is a novel by Rabbi Chaim Potok, first published in 1972. The story follows the experiences of Asher Lev, a Hasidic Jewish boy in New York City. His story continues in the sequel “The Gift of Asher Lev”.

The rial is the currency of Iran (as well as Yemen, Oman, Cambodia and Tunisia). Generally, there are 1,000 baisa in a rial.

The Chevrolet Tahoe is basically the same design as the GMC Yukon, with both cars being sports utility vehicles. The Tahoe is rated at 15 mpg for city driving, but there is a hybrid version which is rated at a whopping 21 mpg …

Leni Riefenstahl was a German film director, actress and dancer. She was a noted figure moving in Adolf Hitler’s circle, and her most famous film was a propaganda piece called “Triumph of the Will”. “Triumph of the Will” documents the 1934 Nazi Party Congress in Nuremberg. We’ve all probably seen many excerpts, shots of huge crowds, Nazis marching with flags, and frenzied speeches from Hitler. Riefenstahl was arrested after the war and detained for a number of years but never found guilty of any crime. She lived a long life, a very long life. She was married for the second time in 2003, at the age of 101 years. She died just a few weeks later, as she had been suffering from cancer.

45 Opportunity to determine if the referee blew it : REPLAY

“The Iliad” is an epic poem by the Greek poet Homer that tells the story of the ten-year siege of “Ilium” (i.e. “Troy”) during the Trojan war. “The Odyssey”, also attributed to Homer, is sometimes described as a sequel to “The Iliad”.

57 Like Scotch, for a minimum of three years : AGED

We use the spelling “whiskey” for American and Irish versions of the drink, and “whisky” for Scotch, the Scottish version.

59 What some smartphones run on : IOS

Sun Yat-sen is known as the “Father of the Nation” in China, and is uniquely revered in both mainland China and on the island of Taiwan. During his rule as president of the country he promoted his political philosophy known as the Three Principles of the People, namely nationalism, democracy and the people’s livelihood.