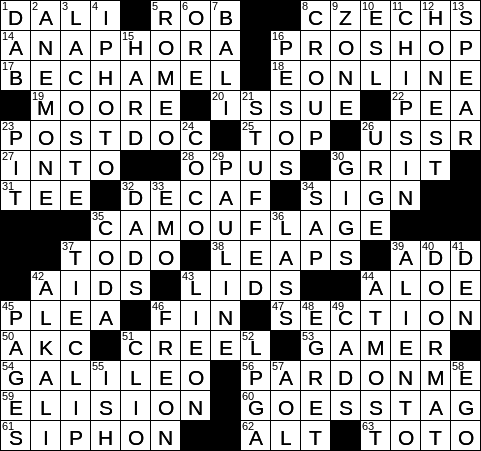 Four rows in the grid each include a hidden animal that is known for its ability to CAMOUFLAGE itself:

Béchamel sauce is a roux made from butter and flour cooked in milk. It is sometimes known simply as white sauce. Béchamel is also considered the “mother sauce” in French cuisine as it is the base of other sauces. For example, Mornay sauce is béchamel with cheese.

Michael Moore is a documentary filmmaker, famously from Flint, Michigan. Moore is known for several documentaries that have performed well at the box office, especially “Fahrenheit 9/11” (2004), “Bowling for columbine” (2002) and “Sicko” (2007).

By the time the Beatles recorded “Back in the U.S.S.R”, they were having a lot of problems working with each other. The song was recorded in 1968, with the band formally dissolving in 1970. Tensions were so great during the recording of “Back in the U.S.S.R” that Ringo Starr actually stormed out saying that he had quit, and the remaining three Beatles made the record without Ringo. Drums were played mainly by Paul McCartney, but there are also drum tracks on the final cut by both George Harrison and John Lennon. Interesting, huh?

Saturn is easily visible from Earth with the unaided eye, but we need some help to see the planet’s famous rings. Galileo was the first person to see Saturn’s rings, when he turned his primitive telescope towards the night sky in 1610. However, he misinterpreted what he was observing and assumed that the rings were in fact two smaller planets located at either side of the larger Saturn.

According to L. Frank Baum’s series of “Oz” novels, there are two Yellow Brick Roads that lead to the Emerald City from Munchkin Country, and it turns out that Dorothy chose the harder of the two. In addition to the yellow roads, there is also a Red Brick Road, which leads from Munchkin County to the Country of the Quadlings.

The respiratory condition known as “croup” results in a characteristic cough that produces a “barking” sound. The condition is usually caused by the viral infection in the upper airway.

48 Bird known for its plumes : EGRET

Michelle Wie is an American golfer on the LPGA Tour. Wie began playing golf at the age of four and was the youngest player ever to qualify for an LPGA tour event. She turned pro just before her 16th birthday.