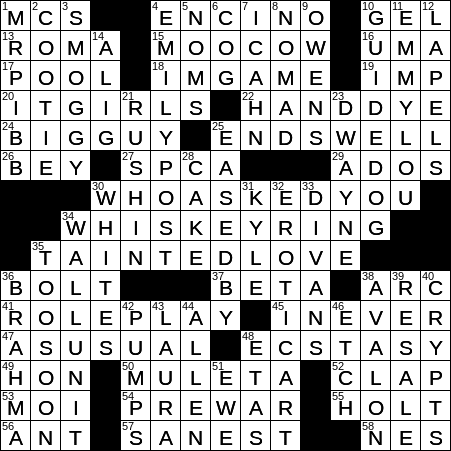 Encino is a district in the City of Los Angeles on the north slope of the Santa Monica Mountains. The area takes its name from a historic parcel of land called Rancho Los Encinos (Ranch of the Evergreens).

17 Sight in front of the Lincoln Memorial : POOL

20 Parvenues with a certain je ne sais quoi : IT GIRLS

30 Response to the peanut gallery : WHO ASKED YOU?

Soft Cell are duo from England whose music falls into the “synthpop/technopop” genre, music from the eighties that features the synthesizer as a predominant instrument. Soft Cell’s biggest hit by far is a great song called “Tainted Love”, which they released in 1981.

37 Version before a stable release : BETA

The “muleta” is the red flannel cloth that a matador uses towards the end of a bull fight, instead of a cape. The muleta serves to distract the bull and also to hide the sword that is used for the kill. The term “matador” is only used in English, and translates aptly enough as “killer”.

Amazon ants are referred to as “slave-raiding” ants. They rob the pupae from related species and use the captured ants as “slaves”. The “slaves” do virtually all the work needed to maintain the Amazon ant nest, including provision of food and nursing the young.

2 Something a kindergartner doesn’t want to get : COOTIE

4 Who once wrote “Nothing is less important than which fork you use” : EMILY POST

Emily Post was a writer from Baltimore, Maryland who is best known for her writings on the subject of etiquette. Her work giving advice on etiquette is continued by the Emily Post Institute, which she founded in 1946.

7 Billionaire who lent his name to a stadium on New York’s Randalls Island : ICAHN

Icahn Stadium is a track and field facility on Randalls Island in New York City. The stadium opened in 2005, helped along the way by a $10 million donation from businessman Carl Icahn. For that, Icahn got his name over the front door.

9 Buck in the jukebox : OWENS

Buck Owens was a very successful country star, along with his backing band, the Buckaroos. Owens had 21 number one hits in the country music charts, but never had a record that successfully crossed over to the popular charts. From 1968 to 1986, Owens was the co-host of the TV show “Hee Haw”.

I sometimes forget that “the terminator” wasn’t the main character in the first “The Terminator” film. The story revolves around Kyle Reese (played by Michael Biehn). Reese is sent back from the future to protect Sarah Connor (played by Linda Hamilton) from the Terminator (played by Arnold Schwarzenegger).

Divans are essentially couches without backs or arms. The design originated in the Middle East, where the couches were commonly found lining the walls of an office that was known as a “divan” or “diwan” meaning “government office”.

36 Member of a holy trinity : BRAHMA

The Avalon is a large sedan that has been produced by Toyota in Georgetown, Kentucky since 1994. “Avalon” was the name of an island featured in Arthurian legend, the place where the sword Excalibur was forged.

There is a basilica in Rome called “San Sebastiano fuori le mura” (Saint Sebastian outside the walls), which is also known as “San Sebastiano ad Catacumbas” (Saint Sebastian at the Catacombs). It’s not known whether catacombs in general derive their name from this location, or whether the church took the name from an earlier term “catacombs”. However, it is known that these Roman underground passageways were the first subterranean cemeteries to be referred to as “catacombs”.

“Laura” is a 1944 film noir directed by Otto Preminger, starring Gene Tierney and Dana Andrews. The film’s screenplay is based on a novel of the same name by Vera Caspary, first published in 1943. “Laura” is ranked highly in most critics’ list of favorite movies.

Sheba is referenced in the Bible several times. The Queen of Sheba is mentioned as someone who traveled to Jerusalem to behold the fame of King Solomon. No one knows for sure where the kingdom of Sheba was located, although there is evidence that it was actually the ancient Semitic civilization of Saba. The Sabeans lived in what today is Yemen, on the Arabian Peninsula.