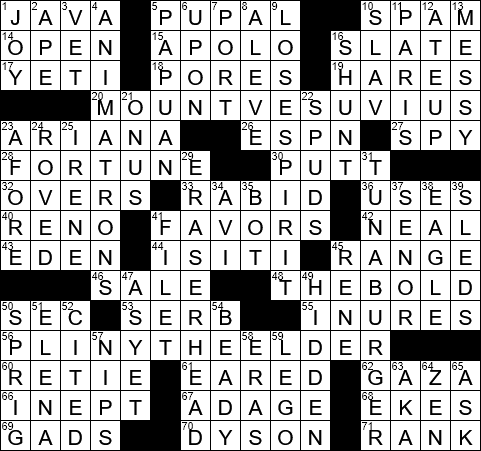 Themed answers relate to Pliny the Elder and his witnessing of the eruption of Mount Vesuvius in 79 AD:

10 Many a phone call from one’s own area code, nowadays : SPAM

16 Lineup at the polls : SLATE

Even though the Arctic wolf is a subspecies of grey wolf, it is white in color, having adapted to its environment.

26 Broadcaster of the X Games : ESPN

53 Speaker of a language that has both Cyrillic and Latin alphabets : SERB

56 Roman writer who came to a bad end by 20-Across : PLINY THE ELDER

3 Do background checks on : VET

4 The T. rex in “Jurassic Park” and others : ANIMATRONS

10 Many a person once trapped behind the Iron Curtain : SLAV

The term “Iron Curtain” was first used in the context of Soviet influence over Eastern Europe in a speech made by Winston Churchill in 1946. He made that address in the US, at Westminster College in Fulton, Missouri.

11 Home of Chanel and Cartier : PARIS

The House of Chanel has its origin in a millinery shop in Paris that Gabrielle “CoCo” Chanel opened in 1909. The shop was on the ground floor of the home of socialite Étienne Balsan, of whom Chanel was his mistress. Using her connection to Balsan, Chanel met many women who lived extravagant lifestyles in Paris in those pre-war years, and hence was able to establish her reputation as a hatmaker. Chanel built on that reputation, and within a few years opened her first dress shop in Paris.

“Avifauna” is the collective name for birds of a specific region. An older term for the same thing is “ornis”, which has the same root as “ornithology”.

63 Letters in front of an alias : AKA