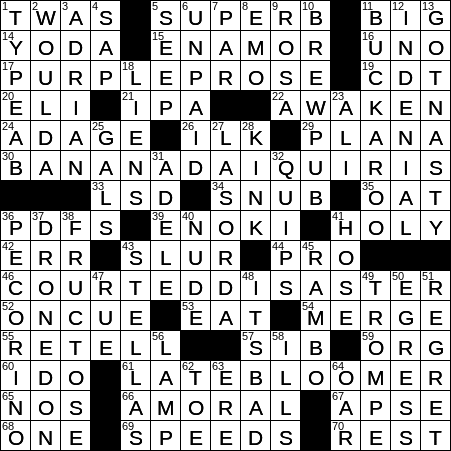 14 Film character who says “Named must be your fear before banish it you can” : YODA

16 Card game with a high level of chance : UNO

20 Whitney in the National Inventors Hall of Fame : ELI

33 You can take a trip with this without traveling : LSD

Microsoft Word documents have the “.doc” file extension, at least those created prior to the introduction of Microsoft Office 2007. The extension used now is “.docx”.

44 One who’s mastered the ropes : PRO

9 Parks who is a civil rights hero : ROSA

Tommy Lasorda had been with the Brooklyn/Los Angeles Dodgers for over sixty years when he retired in 1996 (although he did spend one season playing with the Kansas City Athletics).

32 Lines that Groucho Marx is famous for : QUIPS

36 Cheese whose name comes from the Italian for “sheep” : PECORINO

38 Source of added calories in many processed foods : FRUCTOSE

Fructose is also known as “fruit sugar”. It is commonly found in plants, and is the most water-soluble of all sugars. Many of us consume a lot of “high-fructose corn syrup”. This is a sweetener made from corn starch that is a mixture of glucose and fructose. The natural ratio of fructose to glucose is altered to produce a sweeter syrup by chemically converting much of the naturally occurring glucose into fructose.

A bluenose is a person who is excessively puritanical. Apparently the term comes to us from Nova Scotia, where the potatoes grown had a bluish skin and were called bluenoses. Later, that term was applied to the growers, and I guess they must have had a reputation for being prudish.

The archetypal Tiffany lamp is made using pieces of colored, leaded glass with a copper foil bonding the pieces together, and a solder applied over the foil. The resulting effect resembles a stained glass window.