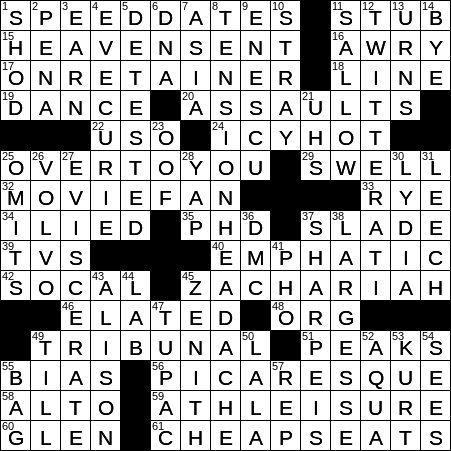 Constructed by: Luke Vaughn
Edited by: Will Shortz

33 Ingredient in an old-fashioned : RYE

An Old Fashioned cocktail is usually made from whiskey or brandy that is muddled with sugar and bitters, and then a twist of citrus rind added.

Enrique Peña Nieto became President of Mexico in 2012. President Nieto quickly struggled with a plummeting approval rating that was initially due to a sluggish economy and a weakened Mexican Peso.

7 Home of yaks and zebus : ASIA

Zebu cattle are most often seen on the Indian subcontinent. They’re the sub-species with the fatty hump on their shoulders, droopy ears and a large dewlap (flap of skin under the neck).

27 Remove the contents of : EVISCERATE

To eviscerate is to take out the viscera, the internal organs.

37 They’re known for their wrinkles : SHAR-PEIS

Alison Lurie is an American novelist. Lurie won a Pulitzer Prize in 1985 for her novel “Foreign Affairs”. Three of her works have been adapted for television: “The War Between the Tates”, “Imaginary Friends” and “Foreign Affairs”.