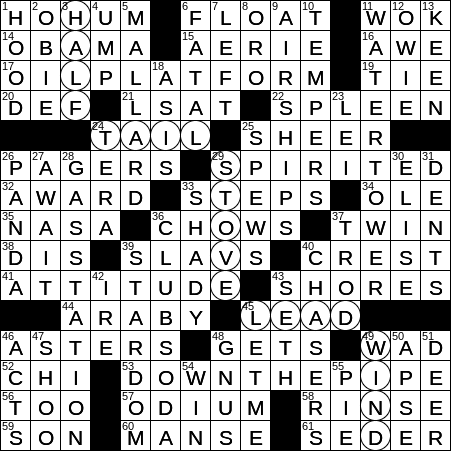 Today’s Reveal Answer: Down the Pipe

Themed answers are highlighted in the grid with circled letters. Each is missing the word PIPE:

“Wok” is a Cantonese word, and the name for the frying pan now used in many Asian cuisines.

22 Part of the lymphatic system : SPLEEN

The spleen has a couple of functions in the human body. It removes old red blood cells, and recycles the iron contained therein. The waste product of this recycling is bile. It also holds a reserve of blood that can be released when necessary (if the body goes into “circulatory shock”). Greek and Roman physicians ascribed to the theory that the body had four basic substances, the so-called four humors. All diseases were caused by these four substances getting out of balance. The four humors were:

A muffler is a device attached to an internal combustion engine that is designed to reduce noise from the exhaust. We don’t use the term “muffler” on the other side of the Atlantic, opting instead for “silencer”.

Rome’s Spanish Steps are known locally as the “Scalinata” and are a set of 135 steps that sit above the Piazza di Spagna. The Spanish Steps actually form the widest staircase in Europe. They always remind me of the movie “Roman Holiday”, as that is where Audrey Hepburn enjoyed her gelato.

The chow chow is a breed of dog that originated in China. The Chinese name for the breed is “Songshi Quan”, which translates as “puffy-lion dog”, a rather apt name given its appearance …

“The Sheik of Araby” is a song that dates back to 1921, when it was a Tin Pan Alley hit. It was soon absorbed into the jazz standard repertoire. The inspiration of the song was Rudolph Valentino’s performance in the 1921 movie “The Sheik”.

53 How a perfect pitch comes … or a hint to the missing parts of the shaded answers : DOWN THE PIPE

Odium is a strong dislike or aversion. The term is Latin in origin and relates to the Latin word “odi” meaning “I hate”.

The mallard is perhaps the most recognizable of all ducks and is also known as the wild duck. The name “mallard” has the same Latin root as our word “male”, probably reflecting how flamboyant the coloring is of the male of the species relative to the female.

8 Treasure on the Spanish Main : ORO

There is an important difference between a blimp (like the Goodyear Blimp) and an airship (like a zeppelin). An airship is a rigid structure with an internal framework that helps maintain the shape of the airbag, whereas a blimp uses the pressure of the helium gas inside the airbag to give it shape.

30 Dedicatee of a Beethoven bagatelle : ELISE

A bagatelle is a bauble or trinket and is a word that we imported from French, in which language it has the same meaning.

We call carbonated water “club soda”, because Club Soda used to be a brand name. The Club brand of drinks is actually Irish, and is owned by a company now known as C&C. As kids, we grew up on Club Orange and Club Lemon. Club Soda, not so much …

The Serengeti is a region in Africa that is located in northern Tanzania and southwest Kenya. The name “Serengeti” comes from the Maasai language and means “Endless Plains”.

The windpipe (also “trachea”) connects the lungs to the pharynx, the cavity of the mouth. The trachea is lined with special cells that secrete mucus which is then moved upwards by tiny hairs (cilia). The mucus traps dirt and dust particles inhaled with the air and cilia move the mucus contaminant away from the lungs’ delicate air sacs, into the mouth. Cigarette smoke overwhelms the mucus and cilia, so that smoke particles make it all the way into the lungs. Not a good thing …

51 Certain animals playing in “Home on the Range” : DEER

The words of “Home on the Range” came before the music, from an 1870s poem called “My Western Home” penned by a Dr. Brewster Higley of Kansas. The music was added by Daniel Kelley, a friend of Higley. And now, a version of the song is the state song of Kansas.