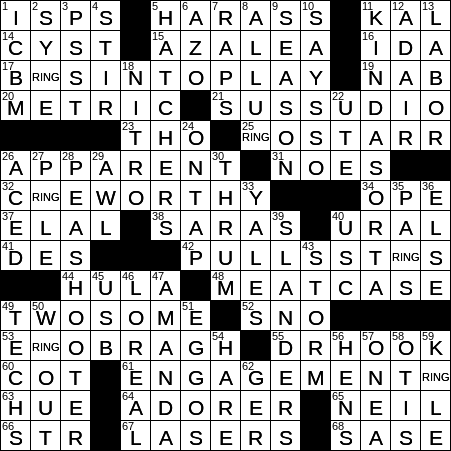 We have a rebus puzzle today, with a RING appearing in several “boxes” in the grid:

1 Cos. with many connections : ISPS

Azaleas are very toxic to horses, sheep and goats, but strangely enough cause no problem for cats or dogs. And if you go to Korea, you might come across “Tug Yonju”, which is azalea wine made from the plant’s blossoms. Azaleas are usually grown as shrubs, but are also seen as small trees, and often indoors.

English musician Phil Collins is best known for his work as a drummer with the rock group Genesis, as well as for his solo career. In fact, Collins is often grouped with Paul McCartney and Michael Jackson, two other artists who had tremendous solo success after careers with very well-known bands.

“Smitten” the past participle of “to smite” meaning “to inflict a heavy blow”. We tend to use “smitten” to mean “affected by love, love-struck”.

Titan was a family of rockets first introduced in 1959. Titan rockets were used to launch man into space in the Gemini Program in the mid-sixties, and were also part of the American ICBM missile deterrent until the eighties.

“Laughing gas” is a common name for nitrous oxide. Nitrous oxide is used as an anesthetic, particularly by dentists. It is also used in motor racing to increase the power output of engines. Laughing gas was first synthesized by the English chemist Joseph Priestley, but it was Humphry Davy who discovered its potential as an anesthetic. Once it was realized that the gas could give the patient a fit of the giggles, “laughing gas parties” became common among those could afford them.

To thrum is to strum a stringed instrument in an idle and monotonous way. The term “thrum” has been around a long time, since the 1590s.

Storm is a superhero in the Marvel Comics universe whose superpower is the ability to control the weather. Storm was played by Halle Berry in the “X-Men” series of movies.

51 Items placed in a toaster : EGGOS