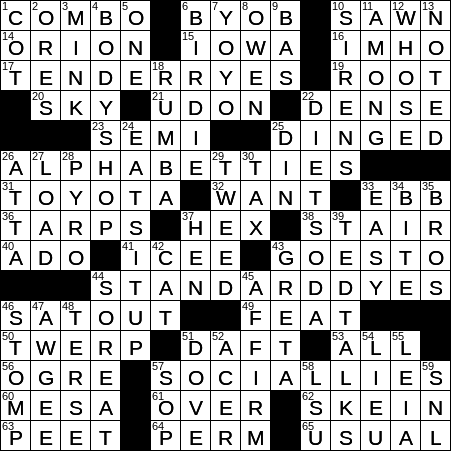 Today’s Theme: The Ayes Have It, I Hear

Themed answers are two-word phrases that sound like a word ending in -ize:

6 Abbr. about alcohol on a party invitation : BYOB

3 Relative of a weasel : MINK

6 Golf score of 5-Down under par : BIRDIE

The American improv comedy TV show “Whose Line Is It Anyway” is a spin-off of a very successful British show of the same name. The British TV show is itself a spin-off of a BBC radio show that I well remember. Lots of fun …

The term “rooster” dates back to the late 1700s, and is used to describe an adult male chicken, primarily here in the US. “Rooster” originated as an alternative to “cock”, as puritans objected to the association with the slang usage of the latter term.

That would be tennis, for example.