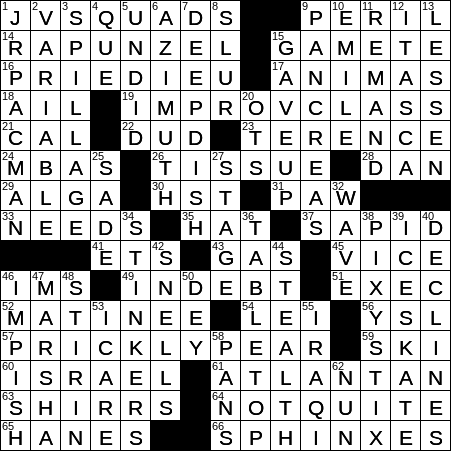 14 One engaged in a hairy escape? : RAPUNZEL

“Prie-dieu” means literally “pray (to) God” in French. A prie-dieu is basically a padded kneeler, with an armrest in front and a shelf on which one placed books of prayer.

Terence is the common name used in English when referring to the Roman playwright Publius Terentius Afer.

Judo is a martial art from Japan that was developed relatively recently, in 1882. The name “judo” translates as “gentle way”. Practitioners of judo proceed through a series of proficiency grades known as the kyu-dan system. At each progression, a different colored belt is awarded.

30 Only 20th-century president whose three distinct initials are in alphabetical order : HST

Something that is sapid is tasty, savory. The opposite to “sapid” is “insipid”, meaning “without taste, bland”.

“Matinée” is a French word used to describe a musical entertainment held during the daytime. “Matinée” is derived from the word “matin”, meaning “morning”, although here the term is used in the sense of “daylight”.

The Dead Sea Scrolls were discovered over a period of years, between 1947 and 1956, in eleven caves on the shores of the Dead Sea. The scrolls are believed to have been written by an ancient Jewish sect called the Essenes, although this has been called into question recently. Many of the texts are copies of writings from the Hebrew Bible.

63 Gathers together with stitching : SHIRRS

Shirring is a decorative technique used when sewing a garment. I don’t understand it …

Jockey was the company that invented the Y-front brief, in 1934.

The Pac-Man arcade game was first released in Japan in 1980, and is as popular today as it ever was. The game features characters that are maneuvered around the screen to eat up dots and earn points. The name comes from the Japanese folk hero “Paku”, known for his voracious appetite. The spin-off game called Ms. Pac-Man was released in 1981, and Jr. Pac-Man in 1983.

In the world of music, a slur is curved line that connects neighboring notes that are to be played smoothly, without separation.

9 Where the islets of Langerhans are located : PANCREAS

32 Image on an oscilloscope : WAVE

An oscilloscope is an electronic instrument that visually shows the variation in voltage of an electrical signal.

A snell is a length of thin line that connects a fishhook to heavier line. The knot that is typically used to fasten a hook to the snell is known as a snell knot.

Marsha Norman won the 1983 Pulitzer for Drama for her play “‘night, Mother”. Norman also wrote the book and lyrics for the Broadway musicals “The Secret Garden” and “The Red Shoes”. She wrote the libretto for “The Color Purple”, and the book for the musical “The Bridges of Madison County”.

50 Susan who starred on TV’s “The Partridge Family” : DEY

Clare of Assisi was one of the first followers of Saint Francis of Assisi. Clare was the founder of the Order of Poor Ladies. The order still exists today and is now known as the Poor Clares in her honor.