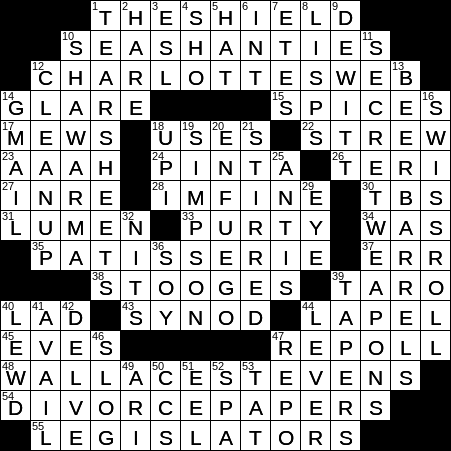 That said, we have some grid art representing a SWISS ROLL.

12 Children’s classic with the line “It is not often that someone comes along who is a true friend and a good writer” : CHARLOTTE’S WEB

“A Tale of Two Cities” by Charles Dickens is the most printed book that was originally written in English. The two cities in the title are of course London and Paris. The novel’s famous opening words are:

The novel’s closing words are almost as famous:

35 Place to buy a 16-Down : PATISSERIE
(16D Sweet treat depicted in this puzzle’s grid : SWISS ROLL)

38 Ones in funny shorts : STOOGES

43 In which you might see an exchange of bishops : SYNOD

44 Something a Mao suit lacks : LAPEL

48 Winner of the 1955 Pulitzer Prize for Poetry : WALLACE STEVENS

Wallace Stevens was a Pulitzer-winning poet who spent most of his life working for an insurance company in Hartford, Connecticut. After Stevens won his Pulitzer, he was offered a faculty position at Harvard, but he declined so that he could keep his job with the Hartford insurance company.

55 Ones on a diet : LEGISLATORS

3 Subj. of many an after-school class : ESL

5 It may be measured in gallons : HAT

The term “ten-gallon hat” describing a cowboy hat only appeared in 1925, and nobody seems to be exactly sure of the term’s origin. Some suggest that the relatively waterproof nature of the hat due to the tight weave might explain it, with images of cowboys giving drinks of water from their upturned hats. However, there’s no way any cowboy hat will hold ten gallons, more like three quarts.

DeWitt Clinton served as Mayor of New York City on three separate occasions, starting in 1803 and ending in 1815. Prior to his mayoral jobs, Clinton served as a US Senator for New York from 1802 until 1803. He also served twice as Governor of New York, from 1817 to 1822, and from 1825 to 1828. As Governor, Clinton was the driving force behind the construction of the Erie Canal. Despite the success of the project, for some time the canal was referred to by many as “Clinton’s Folly”.

The Reuters news agency was formed way back in 1851 by German-born, British entrepreneur Paul Julius Reuter. Reuter had checked the feasibility of a news service for a couple of years prior to launching the agency, and the technologies he used for his study were the telegraph and carrier pigeons!

A sports player who is doing really well might be said to be “on fire”. Sometimes “on fire” is translated into Spanish and the person is said to be “en fuego”.

29 Center of the symbol of the Illuminati : EYE

“Jimmy” is a variant of the word “jemmy”. A jemmy is a type of crowbar, one associated with burglars back in the 1800s.