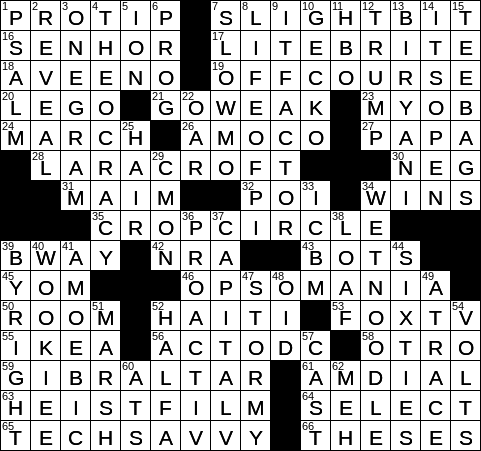 The LIte-Brite toy was introduced in 1967. It is basically a light box with a grid of holes in which colored pegs can be placed to create designs. You can now get a Lite-Brite app for the iPad.

Aveeno is a manufacturer of skincare and haircare products that was founded in 1945. The name Aveeno comes from the Latin name for the common oat, i.e. Avena sativa.

28 Video game character with the most appearances on magazine covers, per Guinness (1,200+) : LARA CROFT

Broadway really is, and always has been, the Main Street of New York City. It started out as the Wickquasgeck Trail that was trampled into the Manhattan brush land by the Native Americans of the area. In the days of the Dutch, the trail became the man road though the island of Manhattan, down to the New Amsterdam settlement in the south. The Dutch described it as a “Breede weg”, a broad street or broad way. The name Broadway was adopted as the official name for the whole thoroughfare in 1899 … on Valentine’s Day.

52 Country whose name anagrams to an island when its fourth letter is doubled : HAITI

Gibraltar is a small British territory on the Mediterranean coast just south of Spain. The British gained control of the area, which is just 2.6 square miles, during the War of the Spanish Succession in 1704. The ownership of Gibraltar is contested by the Spanish, but successive UK governments refuse to cede the territory as it is a major base for the Royal Navy. Gibraltar sits at the narrow entrance to the Mediterranean from the Atlantic.

3 Weight of a Japanese yen coin : ONE GRAM

4 Opposite of a state of disbelief : THEOCRACY

10 One sticking around the rain forest? : GECKO

The Proactiv range of skincare products were introduced in 1995 by two dermatologists who met up with each other while studying at Stanford. Proactiv is market to people suffering with acne. There are quite a few folks who complain about the direct marketing approach to sales used for the products. Customers are “members” of a club, and the products keep coming until a subscription is canceled.

The volt is a unit of electric potential, or voltage. I always think of electrical voltage as something like water pressure The higher the pressure of water (voltage), the faster the water flows (the higher the electric current that flows).

Alessandro Volta was the physicist who invented the first battery, way back in 1800. One of Volta’s first applications of his new invention was to use a battery (and a very long run of wire between the Italian cities of Como and Milan) to shoot off a pistol from 30 miles away!

“Meh!” is one of those terms that are unfamiliar to me outside of crosswords. It is a modern colloquialism meaning “I’m not great, but not bad”. A friendly reader of this blog tells me that the usage of the term increased dramatically after it started to appear regularly in “The Simpsons” starting in the early nineties.