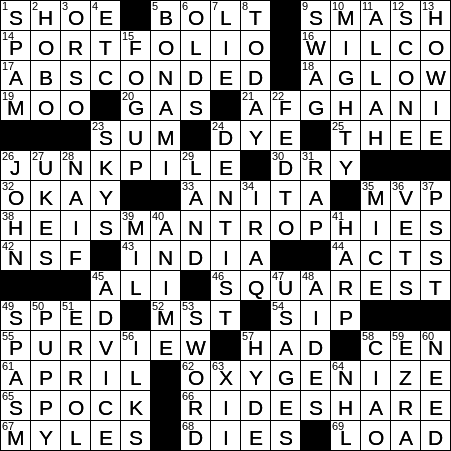 Constructed by: Patrick Merrell
Edited by: Will Shortz

Today’s Theme (according to Bill): A to Z

Collectively, themed clues comprise the letters A through Z, arranged in groups of 3-5. Those same letters appear in the corresponding answer, in the same order:

1 Card holder at a casino : SHOE

These days, a dealer in a casino usually deals cards from a shoe. The shoe has only been around since 1961 when it was invented by magician John Scarne. The dealing device is so called because early versions resembled a woman’s high-heel shoe.

In the world of radio telephony, “wilco” is short for “I understand and will comply”.

In Leonard Bernstein’s “West Side Story”, the female lead character is Maria. Her older friend Anita is also in the gang called the Sharks.

Wyoming is nicknamed the “Equality State”, and the state’s motto is “equal rights”. Wyoming was the first state to give women the vote, and the first to allow women to serve on juries. It was also the first state to have a female governor, Nellie Tayloe Ross, who took office in 1925. Unofficially, Wyoming is also referred to as the “Cowboy State”.

65 TV character who said “Computers make excellent and efficient servants, but I have no wish to serve under them” : SPOCK

67 Standish on the Mayflower : MYLES

Myles Standish was one of the passengers on the Mayflower. He had been hired by the Pilgrims as military advisor for their planned colony in the New World. Standish served as commander of the Plymouth Colony from its founding until his passing in 1656, at the age of 72.

In French, a male friend might be described as “bon ami” (good friend).

27 Some of them come in “pineapple” and “soprano” varieties, informally : UKES

The state symbol of Ireland is the harp. The reason for the use of the harp as a symbol seems to have been lost in time, but it has been used for centuries. The actual harp used as a model for the state symbol is called the Trinity College harp, a medieval instrument on display in the university in Dublin.

Actor Errol Flynn was born in 1909 in Tasmania, where he was raised. In his twenties, Flynn lived in the UK where he pursued his acting career. Around the same time he starred in an Australian film “In the Wake of the Bounty” and then appeared in a British film “Murder at Monte Carlo”. It was in the latter film that he was noticed by Warner Brothers who brought him to America. Flynn’s non-American heritage shone through even while he was living the American dream in California. He regularly played cricket, along with his friend David Niven, in the Hollywood Cricket Club.

Errol Flynn plays the archetypal swashbuckler in the 1935 film “Captain Blood“. The movie is the second of three adaptations of the novel of the same name by Rafael Sabatini. Of course, Captain Blood happens to be an Irishman …

Ezra Pound was an American poet who spent much of his life wandering the world, and spending years in London, Paris, and Italy. In Italy, Pound’s work and sympathies for Mussolini’s regime led to his arrest at the end of the war. His major work was the epic, albeit incomplete, “The Cantos”. This epic poem is divided into 120 sections, each known as a canto.

The Flames are a professional hockey team based in the Alberta city of Calgary. The team has been in Calgary since 1980, but was founded in 1972 in the US as the Atlanta Flames.