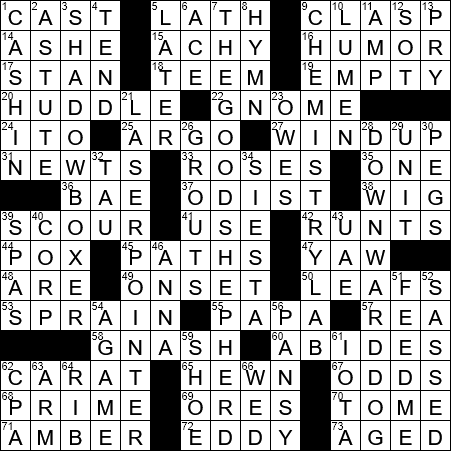 Themed answers are in the DOWNWARD direction, and each ends with a type of DOG:

14 Arthur with a stadium named after him : ASHE

Stan Musial was a retired baseball player who went by the nickname “Stan the Man”, a moniker he was awarded by the Brooklyn Dodgers fans in 1946. Apparently, off the field Stan was quite the harmonica player.

“Powwow” means “gathering”, and is a word used by Native Americans. The term derives from the Algonquian Narragansett “powwow” which translates as “spiritual leader”. The Narragansett also gave us such words as “moose”, “papoose” and “squash”.

Salamanders are lizard-like amphibians found in all across the northern hemisphere. They are the only vertebrate animals that can regenerate lost limbs.

A Horatian ode is an ode with a specific structure, one designed to resemble the odes of the Roman poet Horace.

In a common law jurisdiction with a split legal profession, such as England, lawyers can be either solicitors or barristers. Someone needing legal help will retain a solicitor for that purpose. If a court trial is required, then a barrister is retained to make representation before a judge and perhaps a jury. The barrister is the lawyer who wears a wig.

42 Littlest ones in litters : RUNTS

The Toronto Maple Leafs hockey team was founded way back in 1917. As members of the National Hockey League, the Maple leafs have won the Stanley Cup championships thirteen times, the second best record in the league. Having said that, the last championship the team won was in 1967, and the resulting “drought” is the longest in NHL today.

55 Biggest bear in “Goldilocks and the Three Bears” : PAPA

“The Good Shepherd” is a spy movie released in 2006, directed by Robert De Niro. The lead roles are played by Matt Damon and Angelina Jolie. The film is a fictional account of real events that led to the birth of counter intelligence within the CIA.

The singing and composition of hymns is known as hymnody. The term “hymnody” is also used for a collection of hymns.

The Bunsen burner is a common piece of lab equipment that is used for heating and combustion. The device was invented in 1854 by Robert Bunsen at the University of Heidelberg in Germany. It is sometimes referred to as an “etna”, a nickname coming from the Sicilian volcano.

“Jimmy” is a variant of the word “jemmy” that is used for a type of crowbar, one associated with burglars back in the 1800s.

Grout is a thin mortar used to fill the joints between ceramic tiles. The name “grout” comes from the Old English word “gruta”, the word for a “coarse porridge” (due to the similarity in appearance of the two). Interestingly, the word “grits” comes from the same root. Grout … grits … makes sense …

34 Nap south of the border : SIESTA

56 Colorful flower with a “face” : PANSY

The garden flower called a “pansy” takes its name from the French word “pensée” meaning “thought”. This name was chosen as the flower was often used as a symbol of remembrance. The petals of pansies have dark blotches that often appear to form the outline of a face.

An oxford is a type of lace-up shoe that originated not in Oxford, but actually in Scotland and/or Ireland.