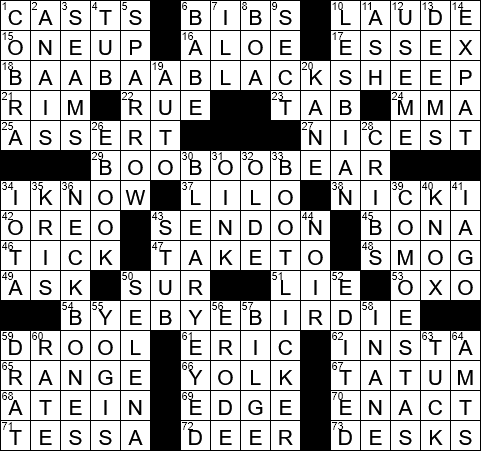 Themed answers are phrases starting with a 3-letter B-word that’s repeated, and ending with an animal:

18 Start of a nursery rhyme on a farm : BAA, BAA, BLACK SHEEP

24 Sport with kicking and boxing, for short : MMA

The iconic comedian, actor, singer and dancer Dick Van Dyke has been in the world of entertainment since the 1940s when he was a radio announcer with the US military. He really made a name for himself on television in his iconic sitcom “The Dick Van Dyke Show”. On the big screen, Van Dyke’s most famous roles were in “Bye Bye Birdie” (1963), “Mary Poppins” (1964) and “Chitty Chitty Bang Bang” (1968).

71 Actress Thompson of “Sorry to Bother You” : TESSA

9 Result of a religious schism : SECT

A schism is a split or a division, especially in a religion.

“Tejano” is the Spanish word for “Texan”. Tejano music is strongly influenced by Cajun culture, because of the proximity of Texas to Louisiana. The other strong influence came with immigrants from Poland and what is now the Czech Republic. These immigrants brought with them the waltz, polka … and the accordion.