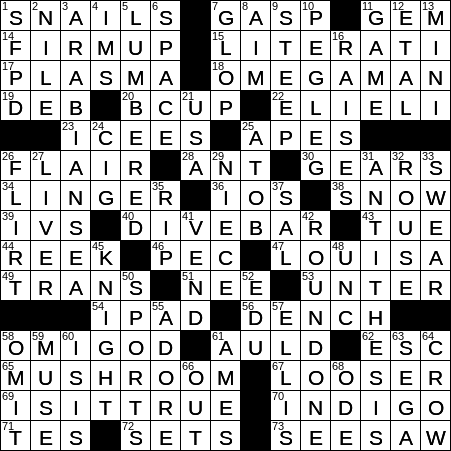 Themed answers take a DIVE downwards in the grid:

40 Seedy hangout … or a hint to finishing four Across answers in this puzzle : DIVE BAR

43 When “Roseanne” aired for most of its original run: Abbr. : TUE

46 Something a push-up strengthens, for short : PEC

Louisa Adams was the wife of President John Quincy Adams. Louisa was actually born in London, and so was the only First Lady of the US not born in this country, until Slovenian-born Melania Trump moved into the White House with President Donald Trump.

I found the 1998 movie “Shakespeare in Love” to be an entertaining romantic comedy. It is a fictional account of Shakespeare having a love affair while in the middle of writing his famous “Romeo and Juliet”. The great cast includes Gwyneth Paltrow, Colin Firth and Judi Dench, with Joseph Fiennes in the title role.

62 Something to hold money in : ESCROW

One type of escrow account is held by a trusted third party for two parties who have some contractual arrangement, an arrangement that is often in dispute. The third party only releases the funds when both parties have fulfilled their contractual obligations.

70 Shade on the visible spectrum : INDIGO

In American football, a quarterback (QB) might throw to a tight end (TE).

2 It flows past Memphis : NILE

3 Locale for much of the world’s oil shipping : ARABIAN SEA

4 Responds to on WhatsApp, say : IMS

27 Neighbor of the gallbladder : LIVER

The human gallbladder is a pear-shaped organ that mainly helps with the digestion of fat. The gallbladder stores and concentrates bile, which is made in the liver. The bile is released from the gallbladder when fat enters the digestive tract. The bile acts as a surfactant, emulsifying the fat in food so that it can be more easily digested.

The actor Sal Mineo’s most famous role was John “Plato” Crawford, the kid who was in awe of the James Dean character in “Rebel Without a Cause”. Sadly, Mineo was murdered in 1976 when he was just 37 years old. He was attacked in the alley behind his Los Angeles apartment and stabbed through the heart. When an arrest was made it was discovered that the murderer had no idea that his victim was a celebrity, and that his plan was just to rob anyone who came along.

Chainmail is a type of armor consisting of a mesh made from small metal rings linked together.

The University of North Carolina (UNC) at Chapel Hill started enrolling students way back in 1795, making it the first public university in the country to open its door to students.

The verb “to crow” meaning “to exult in triumph” is imitative of the sound made by a crow, perhaps as it settles over some dead animal that it has found …

66 Opposite of closeted : OUT