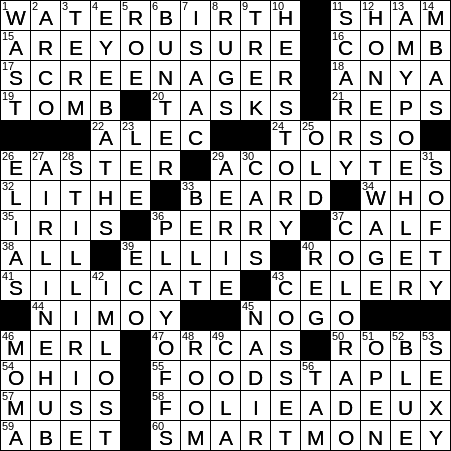 Quartz is a form of silicon oxide and is the second most abundant mineral found in the Earth’s crust, after feldspar. The name “quartz” comes into English via German, and probably ultimately derives from a Slavic word meaning “hard”.

The beverage V8 is a mixture of eight different vegetable juices, hence the name. It was introduced in 1933 by the New England Products Company.

44 Sci-fi star who hosted the documentary series “In Search of …” : NIMOY

“In Search of…” was a pseudo-documentary series narrated by actor Leonard Nimoy that explored the paranormal and the unexplained. The show was created to take advantage of the success of the 1973 special “In Search of Ancient Astronauts”, which was followed by two similar themed one-how programs. These three shows were narrated by Rod Serling. Serling had died by the time the weekly series started to air in 1977, and so Leonard Nimoy was given the job of narrator.

Ohio University was founded well over 200 years ago in 1804, in Athens, the city in which it is still located today.

10 Part of some gender studies : HERSTORY

When Al Capone was a young man, he worked as a bouncer in nightclubs and saloons. He was working the door of a Brooklyn night spot one evening when he apparently insulted a woman, sparking off a fight with her brother. In the tussle, Capone’s face was slashed three times. Capone wasn’t too proud of the incident, nor the “Scarface” moniker that he was given as a result. He always hid the scars as best he could when being photographed, and was also fond of telling people that the scars were from old war wounds.

Novelist Elias Canetti didn’t actually settle in England until he was in his thirties. He was a native of Bulgaria, and as a child also lived in England, Austria, Switzerland and Germany. He wrote in German, even though he spent much of his working life in England, eventually adopting British citizenship. Even then, he spent the last twenty years of his life in Switzerland. His book “Crowds and Power” deals with the behavior of people in crowds and mobs, and the effect of vocal leaders on “packs”. Scary stuff, I would say …

Despite the name, Alaska Airlines in based in Seattle, Washington. The company was founded as McGee Airways in 1932, and back then was based in Anchorage, Alaska. The Alaska Airlines name dates back to 1944.

28 Classic poem with the lines “Did you want to see me broken? / Bowed head and lowered eyes?” : STILL I RISE

The Colorado city of Boulder is located in the foothills of the Rocky Mountains about 25 miles northwest of Denver. Boulder is a college town, and is home to the main campus of the University of Colorado.

To cosset is to pamper. The verb comes from the noun “cosset” which was once used for a lamb that was brought up as a pet.