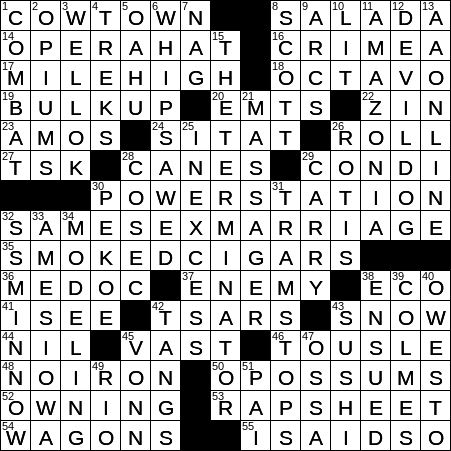 Salada Tea was founded in 1892 to provide tea packaged in foil to the consumer, as opposed to smaller wooden tea chests. This kept the tea fresher and more consistent in flavor.

An opera hat is a spring-loaded, collapsible top hat. Doesn’t that sound cool …?

16 Where Sevastopol is : CRIMEA

Some common book formats/sizes are folio, octavo and quarto. For an octavo book for example, sixteen pages of text are printed, eight pages on each side of a “full-size” piece of paper. The pages are formed by folding the sheet of paper three times in half, giving a group of sixteen pages printed on eight leaves (after separation). The size of the resulting pages of course depends on the size of the original sheet, but each page is one eighth the size of that original (hence the name octavo). Nowadays the octavo size refers to books that are between eight and ten inches tall. If you do the math, octavo books are then twice the size of quarto, and folio twice the size of folio.

32 The Netherlands was the first country to legalize it : SAME-SEX MARRIAGE

Médoc is an appellation for wine in the Bordeaux region of France. The area produces red wine almost exclusively, and no white wine can be labelled as “Médoc”.

50 Pogo and others : OPOSSUMS

“Pogo” is a comic strip launched in 1948 that was the creation of cartoonist Walt Kelly. The story centers on animals that live in the Okefenokee Swamp on the Georgia-Florida border, with the title character “Pogo Possum” being an anthropomorphic opossum.

5 Island with a state capital : OAHU

Alcoholics Anonymous (AA) was founded in 1935 by Bill Wilson and Dr. Bob Smith in Akron, Ohio. As the organization grew, the guiding principles established by the founders were formatted into a 12-step program that was in place by the forties.

15 Film featuring an assassin from 2029 : THE TERMINATOR

Lapsang souchong is a black tea originally from the Chinese province of Fujian. Lapsang is also called “smoked tea” as the leaves are smoke-dried to give a nice smoky flavor. I am going to have to try Lapsang …

Alan Colmes was a relatively liberal political commentator who did a lot of work for Fox News on television and radio. He used to square off against conservative commentator Sean Hannity on the TV show “Hannity and Colmes”.