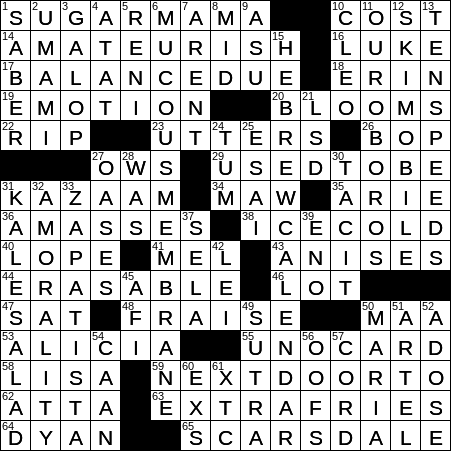 The phrase “Physician, heal thyself” is a quotation from Jesus that appears in Luke’s Gospel.

A leprechaun is a mischievous fairy in Irish folklore. Traditionally, leprechauns spend their days making shoes and hide all their money in a pot of gold at the end of a rainbow. Our word “leprechaun” comes from the Irish name for such a sprite, i.e. “leipreachán”.

“Kazaam” is a 1996 family movie about a genie who grants three wishes to a young boy. Kazaam is the name of the genie, and is played by basketball legend Shaquille O’Neal. The film was directed by Paul Michael Glaser, who played Starsky on “Starsky and Hutch” in the seventies. No one seemed to like the “Kazaam” movie.

Alicia Vikander is an actress from Sweden. She gained recognition with American audiences when she played the humanoid robot in the fascinating 2015 film “Ex Machina”. In 2018, she played the title character in the film “Tomb Raider”. Vikander is married to Irish actor Michael Fassbender.

The actress Dyan Cannon is perhaps best known for playing Alice in the 1969 film “Bob & Carol & Ted & Alice”, for which she received a Best Actress Oscar nomination. Cannon is also famous for having been on Cary Grant’s long list of wives, from 1965 to 1968 (and he was 33 years her senior).

A galop is a type of dance that was especially popular in Parisian society in the 1800s. It is a fast-paced dance named after the fastest running gait of a horse (a gallop). The most famous exponent of the form was Johann Strauss II.

15 What ends with Adar : HEBREW CALENDAR

Adar is the twelfth month of the Hebrew ecclesiastical calendar. Adar is equivalent to February-March in the Gregorian calendar.

“White Rabbit” is a song recorded in 1967 by Jefferson Airplane that made it into the top ten. The lyrics make blatant drug references, and use imagery from the “Alice” children’s novels by Lewis Carroll such as the White Rabbit, the White Knight, the Red Queen and the Dormouse.

When Columbus made his famous voyage of discovery, the largest of his three ships was the Santa Maria. The Santa Maria ran aground on the coast of Hispaniola on Christmas Day in 1492 and was lost. 39 of Columbus’s men were left behind with the permission of the locals. These men stripped the timbers from the Santa Maria and used them to build a settlement they called La Navidad (Spanish for “Christmas”). La Navidad is now the modern town of Môle-Saint-Nicolas in the Republic of Haiti.

The Russian cooperative associations known as artels were often pretty informal affairs. Basically any group could get together and form an artel for any specific commercial purpose … anything from gold-mining and fishing, to stealing and begging.

“All My Ex’s Live in Texas” is a song released in 1987 by country singer George Strait.

“Ecstasy” (sometimes “XTC”) is a street name for the drug 3,4-methylenedioxymethamphetamine (MDMA). MDMA was first synthesised way back in 1912, but wasn’t used recreationally until the late sixties and early seventies. The drug was designated a controlled substance in the US in 1988.