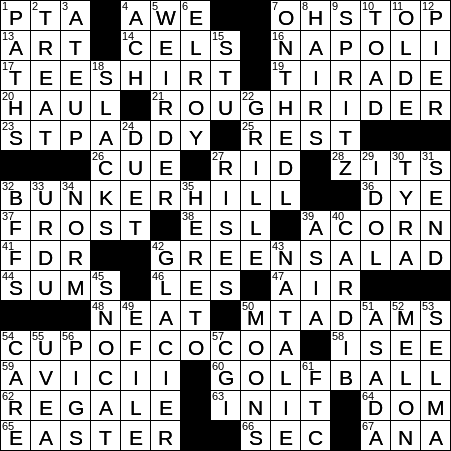 Themed answers start with places where a GOLF BALL might be found on a golf hole, and in order from TEE to CUP:

The term “museum” comes from the ancient Greek word “mouseion” that denoted a temple dedicated to the “Muses”. The Muses were the patrons of the arts in Greek mythology.

Naples (“Napoli” in Italian) is the third largest city in Italy. The name “Napoli” comes from the city’s Ancient Greek name, which translates as “New City”. That’s a bit of a paradox as today Naples is one of the oldest continuously-inhabited cities in the world.

21 Cavalryman under Teddy Roosevelt during the Spanish-American War : ROUGH RIDER

The regiment known formally as the 1st US Volunteer Cavalry is more familiarly known as the Rough Riders. When Theodore Roosevelt was a Lieutenant-Colonel in the unit, it became known as “Roosevelt’s Rough Riders”.

28 Concerns for a dermatologist, informally : ZITS

Jelly beans are thought to have originated in Boston, and it is documented that they were sent from there by families and friends of soldiers fighting in the Civil War.

Robert Frost had a poem published in 1916 in which he describes the road he took in the last lines:

I took the one less traveled by,
And that has made all the difference.

Because of these last lines, the poem is often assumed to be titled “The Road Less Traveled”. In fact, the poem’s correct name is “The Road not Taken”. Quite interesting …

39 Part of a squirrel’s stash : ACORN

Victor Hugo’s famous 1862 novel “Les Misérables”has been translated into English several times. However, the title is usually left in the original French as a successful translation of “les misérables” seems to be elusive. Some suggestions for an English title are “The Wretched”, “The Victims” and “The Dispossessed”. The novel follows the lives of several characters including an ex-convict Jean Valjean, a fanatic police inspector Javert, a beautiful prostitute Fantine, and Fantine’s illegitimate daughter Cosette.

Mount Adams is a volcanic peak in the state of Washington, in the Cascade Range. There was an unsuccessful attempt in the 1930s to have the Cascade Range renamed to the President’s Range, with each of the major peaks named for a US president. The plan was to rename Mount Hood as Mount Adams, after President John Adams. Due to a cartographer’s error, the relatively unknown peak that we now call Mount Adams was given the name, instead of Mount Hood. The plans for “the President’s Range” came to nought, but the Mount Adams name stuck.

A monogram is a design with two or more letters intertwined or combined in some way to make a single symbol. The term “monogram” comes from the Greek “mono” meaning “single” and “gramma” meaning “letter”.

“The Jetsons” is an animated show from Hanna-Barbera that had its first run in 1962-1963, and then was recreated in 1985-1987. When it debuted in 1963 on ABC, “The Jetsons” was the network’s first ever color broadcast. “The Jetsons” is like a space-age version of “The Flintstones”. The four Jetson family members are George and Jane, the parents, and children Judy and Elroy. Residing with the family in Orbit City are Rosie the household robot and Astro the pet dog.

Something described as “on the down low” is “secret”. The phrase is often shortened to “on the DL”, The same abbreviated expression can also mean “on the disabled list” in sports.

9 Small squirt, as of perfume : SPRITZ

39 Home of the Himalayas : ASIA

The beautiful Glacier National Park has been a park since 1910, and covers over one million acres of Montana.

Actress Natalie Portman was born in Israel, in Jerusalem. She moved to the US with her family when she was just three years old.

50 Deimos and Phobos, for Mars : MOONS

Mars has two moons, the larger of which is Phobos and the smaller Deimos. “Phobos” is the Greek word for “fear”, and “Deimos” is Greek for “dread”.

What we call honeydew melons are also known as white antibes, especially in France and Algeria where the cultivar has been grown for many years. Antibes is a commune in southeastern France, located between Nice and Cannes.

The Alabama city of Selma was settled in 1815. It was named in 1820 by Alabama politician William R. King, who would later serve briefly as US Vice President under President Franklin Pierce. Meaning “high seat, throne”, King chose the city’s name from the Ossianic poem “The Songs of Selma”. Today, the city is perhaps best known for the Selma to Montgomery civil rights marches, which ultimately led to the Voting Rights Act of 1965.

“FX” (sometimes “f/x”) is an abbreviation for “effects”, as in “special effects”.