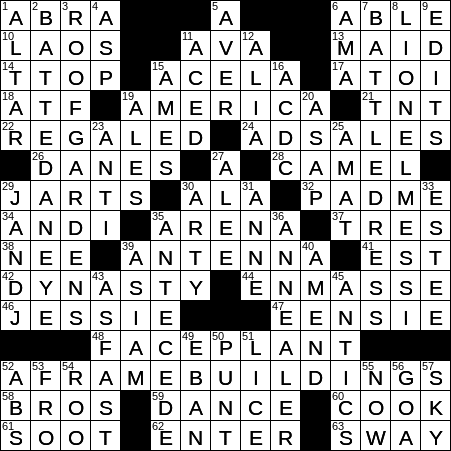 1 Start of an incantation : ABRA-

“Selma” is a 2014 film about the Selma to Montgomery marches of 1965. Directed by Ava DuVernay, the movie stars David Oyelowo as Martin Luther King, Jr. and Tom Wilkinson as President Lyndon B. Johnson.

19 Land made for you and me, in a Woody Guthrie song : AMERICA

Copenhagen is the largest city and the capital of Denmark. I haven’t had the privilege of visiting Copenhagen, but I hear it is a wonderful metropolis with a marvelous quality of life. The city is also very environmentally friendly, with over a third of its population commuting to work by bicycle.

In the “Star Wars” universe, Padmé Amidala is the Queen of the planet Naboo. Played very ably by Natalie Portman, Padmé becomes the secret wife of Anakin Skywalker, later revealed to be Darth Vader. As such, Padmé is also the mother of Luke Skywalker and his sister, Princess Leia Organa.

The Oracle Arena in Oakland, California is most famous as the home of the NBA’s Golden State Warriors. Having opened in 1996, it is the oldest arena in use for NBA games. One might also argue that the Oakland Arena is home for the Grateful Dead as the band played more concerts there (66) than in any other venue.

52 Structures illustrated twice in this puzzle through both black squares and letters : A-FRAME BUILDINGS

60 Captain who circumnavigated the globe : COOK

The famed British explorer Captain James Cook made three voyages of discovery into the Pacific Ocean. Cook was in command of HMS Resolution on his third voyage, and he and his crew he became the first Europeans to visit the Hawaiian Islands, in 1778. He landed on Kauai and named the whole archipelago the Sandwich Islands, in honor of the fourth Earl of Sandwich who was in charge of the British Admiralty at the time. Cook continued his voyage, leaving Hawaii to explore the coast of what is now called Canada and Alaska, and returning to Hawaii the following year. After one month of contact with the native Hawaiians, Cook departed from the islands but was forced to return to repair a broken mast. Relations between the Europeans and the islanders had been good but despite this a dispute developed and got out of control that resulted in Cook being struck on the head and stabbed to death. His body was dragged away by the islanders, and as an apparent sign of respect for the Captain, the natives processed his body according to funeral traditions associated with Hawaiian kings and elders. Eventually, after a petition from the remaining crew, some of Cook’s remains were also returned for a formal burial at sea, adhering to British naval tradition.

3 Adjuncts to some penthouses : ROOF GARDENS

The medical company Johnson & Johnson (J&J) was founded in 1886, not by two brothers as the name would suggest, but by three. Robert Wood Johnson, James Wood Johnson and Edward Mead Johnson formed the company initially to manufacture ready-to-use surgical dressings.

The official song of the US Air Force (USAF) is entitled “The US Air Force”, and was written in 1938 by Robert MacArthur Crawford. The original title was “Army Air Corps”, and this was changed to “Army Air Force” during WWII when the service changed its name. The current title was adopted in 1947, when the USAF became a separate service. Regardless of the official name, the song is commonly referred to as “Wild Blue Yonder”.

Off we go into the wild blue yonder,
Climbing high into the sun
Here they come zooming to meet our thunder
At ’em boys, Give ‘er the gun!
Down we dive, spouting our flame from under
Off with one helluva roar!
We live in fame or go down in flame. Hey!
Nothing can stop the U.S. Air Force!