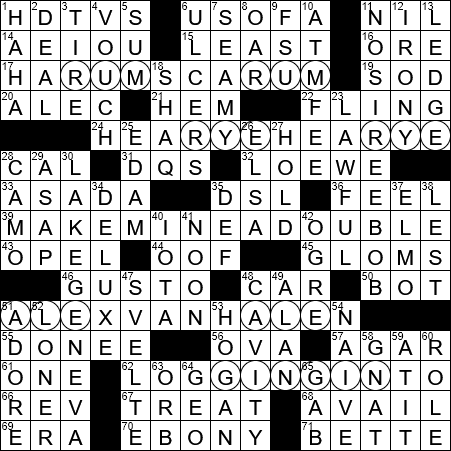 Themed answers each include two hidden words, both of which are the same alcoholic drink:

Alan Jay Lerner was a lyricist from New York City who was known for his collaboration with Frederick Loewe and Burton Lane. Lerner was also known for his colorful private life. He was left with a persistent amphetamine addiction after being treated with “vitamins with enzymes” in the sixties, that were actually hypodermic shots laced with amphetamines. He also married eight times, and was often in dire financial straits due to the heavy load of alimony payments.

48 Offering from Hertz or National : CAR

National Car Rental was founded back in 1947 as a conglomerate of 24 independent rental agencies that had already existed around the country.

51 Rock drummer whose last name is the same as his band : ALEX VAN HALEN (hiding a double “ale”)

When we run a “tab”at a bar, we are running a “tabulation”, a listing of what we owe. Such a use of “tab” is American slang that originated in the 1880s.

Ebony is another word for the color black (often shortened to “ebon” in poetry). Ebony is a dark black wood that is very dense, one of the few types of wood that sinks in water. Ebony has been in high demand so the species of trees yielding the wood are now considered threatened. It is in such short supply that unscrupulous vendors have been known to darken lighter woods with shoe polish to look like ebony, so be warned …

“Beaches” is a 1988 film starring Bette Midler and Barbara Hershey as two friends who have known each other since childhood, with John Heard playing the third in a love triangle. The film’s theme song, “Wind Beneath My Wings”, became a huge hit for Midler.

Competitive team rowing is sometimes referred to as “crew”. The narrow boat used in the sport is called a shell.

Florida State University (FSU) is located in Tallahassee, the state capital of Florida. The school’s athletic teams are known as the Seminoles (sometimes “the ‘Noles”). The team name was chosen in 1947 by the students in a vote, and alludes to the Seminole people of Florida.

30 Body of water between France and Switzerland : LAKE GENEVA

“Crocodile Dundee” is an Australian film released in 1986, and starring Australian comedian Paul Hogan in the title role as Mick Dundee with American actress Linda Kozlowski playing the female lead. The main characters fell in love on-screen, and Hogan and Kozlowski fell for each other off-screen. Hogan divorced his wife (whom he had already married twice) and wedded Kozlowski in 1990.