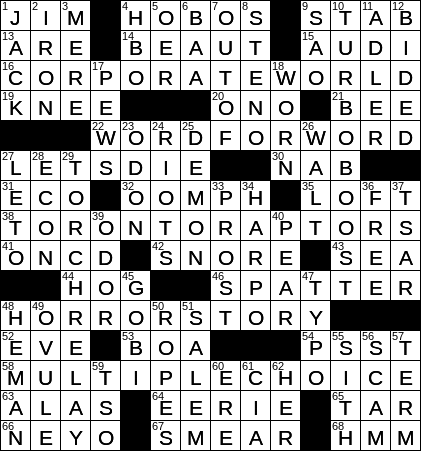 Themed answers each include MULTIPLE (three) instances of the letter sequence OR:

A jim-dandy is someone or something that is excellent. The term “jim-dandy” might possibly arise from the song “Dandy Jim of Caroline” that was popular in the 1840s.

John Lennon and Yoko Ono married at the height of the Vietnam War in 1969. The couple decided to use the inevitable publicity surrounding their wedding and honeymoon to promote peace in the world. They honeymooned in the Presidential Suite of the Amsterdam Hilton, inviting the world’s press to join them and to witness their “bed-in”. They spent the week talking about peace, and an end to war. The marriage and bed-in is chronicled by the Beatles in their song “The Ballad of John and Yoko”.

Chicago’s Adler Planetarium opened in 1930, making it the first and oldest planetarium in the Western Hemisphere. The facility is named for Max Adler, a former Sears executive and philanthropist who provided the funds for construction.

23 Stuff oneself with, briefly : OD ON

Harpo Marx was the second oldest of the Marx brothers. Harpo’s real name was Adolph, and he earned his nickname because he played the harp. Famously, Harpe didn’t speak on screen, a routine that he developed after reading a review that he performed really well when he just didn’t speak! He would usually whistle or toot a hand-held horn instead of speaking.

The large desert in Asia called the Gobi lies in northern China and southern Mongolia. The Gobi desert is growing at an alarming rate, particularly towards the south. This “desertification” is caused by increased human activity. The Chinese government is trying to halt the desert’s progress by planting great swaths of new forest, the so called “Green Wall of China”. The name “Gobi” is Mongolian for “waterless place, semidesert”.

The Salem witch trials were a series of hearings held in 1692 and 1693 in colonial Massachusetts, most famously in Salem. As a result of mass hysteria, twenty people were convicted of practicing witchcraft and were executed. The events were deemed to be a terrible injustice almost immediately. As early as 1696, there was a legal ruling by the Massachusetts General Court that referred to the outcome of the trials as a tragedy. In 2001, the massachusetts legislature officially exonerated all of those convicted.

Grift is money made dishonestly, especially as the result of a swindle. The term is perhaps an alteration of the the word “graft”, which can have a similar meaning.