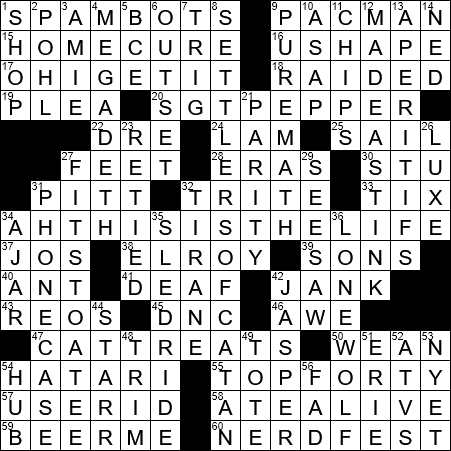 Jos. A. Bank Clothiers is a men’s store that specializes in affordable men’s suits.

“Hatari!” is a film directed by Howard Hawks that was released in 1962. The movie stars John Wayne as a big game hunter in Africa. “Hatari” translates from Swahili as “danger”.

Amazon Prime is a membership service that Amazon introduced in 2005.

Frederik Pohl is an American science-fiction writer, a winner of three Hugo awards. Pohl started off his career as a literary agent, and was the only agent ever hired by Isaac Asimov.

The best works of science fiction and fantasy published each year are recognized annually by the Nebula Awards. The first Nebulas were awarded in 1966.

7 Class in which kids may learn about sin? : TRIG

8 Best-selling game with a hexagonal board : SETTLERS OF CATAN

13 Kir and Campari, for two : APERITIFS

Campari is an alcoholic beverage with a distinctive red flavor and a pleasant, yet bitter taste. It is a key ingredient in one of my favorite cocktails: an Americano (one part Campari, one part sweet vermouth and a dash of club soda).

32 Capital on the Balkan Peninsula : TIRANE

The mineral known as jasper is a form of quartz. Usually colored red, jasper can be used as a stone in semi-precious jewelry. In fact, jasper is a birthstone for someone born in March.

Ken Starr has to be one of the most famous lawyers in recent history, due to his tenure as Independent Counsel when President Bill Clinton was in office. Starr’s original brief was to investigate the suicide of White House Counsel Vince Foster as well as to continue the investigation of the Whitewater controversy in which then-Governor Clinton was accused of applying pressure to arrange an illegal loan to one of his partners in the Whitewater land deal. Famously, Starr’s purview was extended to include an investigation into President Clinton’s extramarital affair with Monica Lewinsky, to determine if the President had lied under oath about his relationship with the young intern.

Erie is a city in the very north of Pennsylvania sitting on the southern shore of Lake Erie. The city takes its name from the Erie Native American tribe that resided in the area. Erie is nicknamed the Gem City, a reference to the “sparkling” water of Lake Erie.

53 Vote in the Security Council : NYET

1 Prime directive? : SHOP
2 Nebula Award winner Frederik : POHL
3 Guy’s gal : AMIE
4 Pioneering thrash metal band with its own music festival, Gigantour : MEGADETH
5 Dating letters : BCE
6 Commencement : OUTSET
7 Class in which kids may learn about sin? : TRIG
8 Best-selling game with a hexagonal board : SETTLERS OF CATAN
9 College area of study with no application required? : PURE MATH
10 On the double : ASAP
11 Contents of a bowl or a pot : CHIPS
12 Complained loudly and publicly : MADE A STINK
13 Kir and Campari, for two : APERITIFS
14 Stark family member on “Game of Thrones” : NED
21 What the U.S. and Canadian dollars had, roughly, in the early 2010s : PARITY
23 Made looser or tighter, in a way : RETIED
26 Opulence : LUXE
27 Is perfect, clothing-wise : FITS TO A TEE
29 It’s got its ups and downs : SEESAW
31 Mobile home? : PHONE CASE
32 Capital on the Balkan Peninsula : TIRANE
34 Barely open : AJAR
35 It’s going downhill : SLED RIDE
36 Not a team player : LONE WOLF
42 Often-reddish quartz : JASPER
44 1990s’ ___ Report : STARR
48 Crop : TRIM
49 Something brought to a supermarket : TOTE
51 City on a lake of the same name : ERIE
52 Off-road rides, for short : ATVS
53 Vote in the Security Council : NYET
54 Nucleus : HUB
56 Something everyone’s doing : FAD