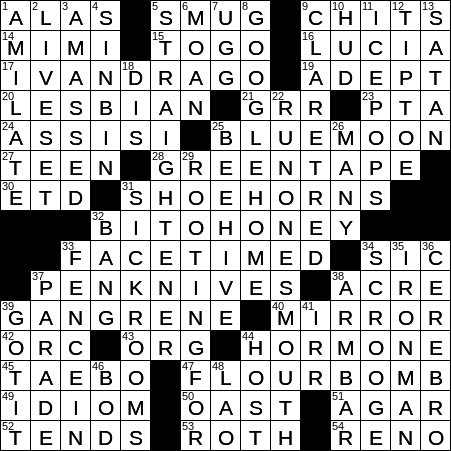 Bit-O-Honey is a candy bar consisting of pieces of almond in a honey-flavored taffy. Bit-O-Honey has been around since 1924.

World of Warcraft is an online role-playing game. My son informs me that the game is not that great. Like I would know …

51 Substance made from seaweed : AGAR

“Ginnie Mae” is the familiar nickname for the Government National Mortgage Association (GNMA), a government-owned corporation created in 1968 with the objective of promoting home ownership. The “Ginnie Mae” nickname is derived from the GNMA abbreviation.

26 Word in the translation of “e pluribus unum” : MANY

The original use of our word “quarantine”, back in the 1500s, was as a legal term. A quarantine was the 40 days in which a widow had the legal right to reside in her dead husband’s house.

A skinflint is a miser. The term arose as slang around 1700, to describe a person who “skin a flint” in order to save or make money.

An Ironman Triathlon is a race involving a 2.4 mile swim, a 112 mile bike ride, and a marathon run of just over 26 miles. The idea for the race came out of a debate between some runners in the 1977 Oahu Perimeter Relay. They were questioning whether runners, swimmers or bikers were the most fit athletes. The debaters decided to combine three local events to determine the answer, inviting athletes from all three disciplines. The events that were mimicked to come up with the first triathlon were the Waikiki Roughwater swim (2.4 miles), the Around-Oahu Bike Race (115 miles) and the Honolulu Marathon (26.2 miles). The idea was that whoever finishes first would be called “the Iron Man”. The first triathlon was run in 1978, with fifteen starters and only twelve finishers. The race format is used all over the world now, but the Hawaiian Ironman is the event that everyone wants to win.

In the “X-Men” universe, Cerebro is a device that can amplify the brainwaves of a user with telepathic capabilities. Cerebro is routinely used to distinguish between mutants and humans.