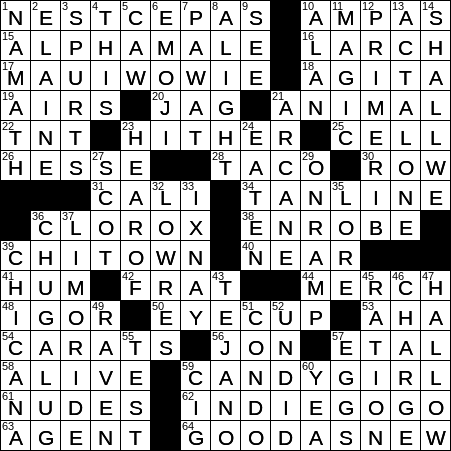 “N’est-ce pas” is a French expression that is often added to the end of a statement, turning it into a question. The expression translates into “isn’t that so?”

10 Org. whose founders include Cecil B. DeMille : AMPAS

Cecil B. Demille was a movie director and producer who started his professional career in the silent era. DeMille’s movies were often epic works, such “Cleopatra” (1936), “Samson and Delilah” (1949), “The Greatest Show on Earth” (1952) and “The Ten Commandments” (1956). The Golden Globe Cecil B. DeMille Award is named in his honor, and indeed he was its first recipient.

“Agita” is another name for “acid indigestion”, and more generally “agitation, anxiety”.

20 Alternative to a Lambo : JAG

Hermann Hesse was not only a novelist, but also a poet and a painter. His best known work is probably his 1927 novel “Steppenwolf”. Hesse was awarded the Nobel Prize in Literature in 1946.

30 Part of a guess in Battleship : ROW

Battleship is a remarkably fun guessing game that I used to play as a child. Back then we would play it just using pencil and paper, although these days kids are more likely to play an electronic version of the game.

31 Only place in the U.S. to host both the Summer and Winter Olympics, informally : CALI

Clorox bleach was first produced by a business called the Electro-Alkaline Company in 1913, and just a few miles from where I live here on the east side of San Francisco Bay. I use a generic version of Clorox as the source of chlorine for my swimming pool. It’s the same chemical solution as that sold for pools, just half as concentrated and a lot cheaper!

Pine-Sol first came on the market in 1929, and is a cleaner based on pine oil.

“Candy Girl” is a 1963 hit song recorded by the Four Seasons. The B-side of “Candy Girl” is “Marlena” that also made it into the charts, on its own merits.

Indiegogo is a crowdfunding website with a company headquarters in San Francisco. Online crowdfunding really started in the late nineties, and Indiegogo was founded 2008.

Legendary quarterback Joe Namath played most of his professional football games with the New York Jets. He was dubbed “Broadway Joe” in 1965 by offensive tackle Sherman Plunkett, a reference to Namath’s appearance on the cover of “Sports Illustrated”. Namath had played college football with the University of Alabama but left school without finishing his degree, to play professionally. Many years later he enrolled in Alabama’s External Degree program, and graduated with a BA in December 2007, at 64 years of age. Well done, Joe!

10 Boy’s name that becomes a girl’s name if you move the first letter to the end : ALAN

“Alan” becomes “Lana” by moving the first letter to the end.

39 Woman who has traveled to el Norte, maybe : CHICANA

“El Norte” is the term many people in Central America use for the United States and Canada. It translates from Spanish as “the North”.

43 Music style that might feature an accordion and a bajo sexto : TEJANO

“Tejano” is the Spanish word for “Texan”. Tejano music is strongly influenced by Cajun culture, because of the proximity of Texas to Louisiana. The other strong influence came with immigrants from the Poland and what is now the Czech Republic. These immigrants brought with them the waltz, polka … and the accordion.