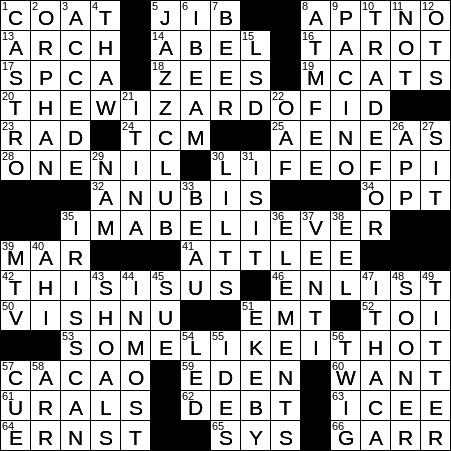 Themed answers are titles of famous works that include a two-letter word that has been reinterpreted as an initialism:

5 Projecting arm of a crane : JIB

The lifting device known as a crane is so called because of its resemblance to the wading bird with the same name.

“Magnum, P.I.” is a TV series that aired in the eighties starring Tom Selleck in the title role. The show was incredibly successful, especially during its first five years. Many big names made guest appearances including Vic Morrow, Orson Welles and Frank Sinatra.

35 Advice for how the pope can reach out online? : I.M. A BELIEVER

“This Is Us” is a television drama that debuted in 2016. The storyline centers on three siblings and their parents. Two of the siblings are the surviving members of a triplet pregnancy. The parents decide to adopt a child born on the same day as the surviving siblings. The adopting family is white, and the adopted child is black.

50 Hindu protector of the universe : VISHNU

Vishnu is one of the main deities in the Hindu tradition, and is one of the Trimurti (trinity) along with Brahma and Shiva. Vishnu is usually depicted as having four arms and pale blue skin.

53 Certain people prefer their computer specialists to be attractive? : SOME LIKE I.T. HOT

“Some Like it Hot” is such a fun movie, It was released in 1959 and directed by Billy Wilder. The big three in the cast are Marilyn Monroe, Tony Curtis and Jack Lemmon. Several years ago a stage version of “Some Like It Hot” was playing in San Francisco, with Tony Curtis in the cast. This time he played the older man who was wooing the Jack Lemmon character in the movie.

57 Bean harvested by the Aztecs : CACAO

15 Pitcher Dock Ellis claimed to have used this before throwing a no-hitter in 1970 : LSD

An iris scan is a method of biometric identification. It depends on the fact that the complex patterns in the irises are unique to an individual. Not that an iris scan differs from a retinal scan. The latter uses technology that scans the unique pattern of blood vessels in an individual’s retina.

The 1889 Indian Appropriations Act officially opened up the so called Unassigned Lands, land in Oklahoma on which no Native American tribes had settled. Once the Act was signed, those lands became available for settlement. Those people that settled the same lands illegally, prior the date specified, they were termed “Sooners” as their situation was defined in the “sooner clause” of the Act. “Sooner State” is now a nickname for Oklahoma.