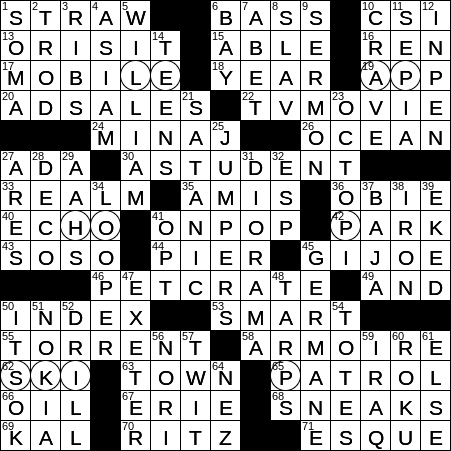 10 Franchise with a “Cyber” spinoff : CSI

I wasn’t sure of the origin of the term “leap year”, and when I checked I found it to be fairly obvious. As a reference, let’s use March 25, 2007, a Sunday. The year before, in 2006, March 25th fell one weekday earlier on a Saturday. That follows the rule that any particular date moves forward in the week by one day, from one year to the next. However, the next year (2008) has an extra day, February 29th. So March 25, 2008 falls on a Tuesday, “leaping” two weekdays forward, not one, as 2008 is a “leap” year. I think I am more confused now then when I started this paragraph …

Nancy is a city in northeastern France.

Dodger Stadium in Los Angeles is the third oldest stadium currently used in Major League Baseball (after Fenway Park in Boston and Wrigley Field in Chicago).

“Hop on Pop” is a Dr. Seuss book that was first published in 1963 with the subtitle “The Simplest Seuss for Youngest Use”. “Hop on Pop” was listed by former First Lady Laura Bush as her favorite title, citing the memories evoked of family life with her young daughters.

“Armoire” is the French word for “wardrobe”, and is used in English for a standing closet that stores clothes.

The suffix “-esque” came into English from Italian (“-esco”), which in turn derives from Latin (“-iscus”).

Bay is a reddish-brown color. The term “bay” usually describes the coat of a horse, or a horse with a coat of such a color.

American Pharoah was the twelfth winner of the Triple Crown, achieving the feat in 2015. The horse’s name was inspired by that of his parents: Pioneerof the Nile (dam) and Yankee Gentleman (sire). And, as some kind blog readers have pointed out, there are a some unexpected spellings in the names of horses. One might expect “American Pharoah” to be spelled “American Pharaoh”, and indeed “Pioneerof the Nile” to be written as “Pioneer of the Nile”. More challenges for us crossworders …

When the race horse Citation won the Hollywood Gold Cup in 1951, it became the first horse with career winnings over $1 million. After that win, Citation’s owners promptly retired him to stud.

The Republic of Belarus is a landlocked country in Eastern Europe, located east of Poland and north of Ukraine. Belarus didn’t exist as an entity until the Russian Revolution when it was created as one of the Soviet Socialist Republics (SSRs) that made up the USSR. The Republic of Belarus was formed soon after the USSR dissolved in 1990, but unlike many of the former Soviet Republics, Belarus has retained many of the old Soviet policies. Alexander Lukashenko is the country’s president and he believes in state ownership of the economy. Belarus and Russia have formal agreements in place that pledge cooperation.

A diorama is a full-scale of small-scale replica of a scene. We mostly see full-size dioramas in museums, whereas our kids might create small-scale dioramas as homework projects. The original diorama was a picture-viewing device that was invented in 1822 by Louis Daguerre and Charles Marie Bouton. These historic dioramas were quite large, and featured scenes that appeared to change as the lighting was manipulated.

Exeter is a town in New Hampshire that was incorporated way back in 1638. Exeter takes its name from the Exeter River that passes through the town.

I do enjoy classical guitar music, but there isn’t a huge choice on CD. There is one very special piece called “Gran Vals” by Francisco Tárrega, written in 1902. This piece has a unique reputation as it contains a phrase that was once the most listened-to piece of music in the whole world. Just a few bars into the work one can hear the celebrated Nokia ringtone.

Roku is a manufacturer of digital media players that allow access to audio and video programming over the Internet that is shown on television. Roku was founded in Los Gatos, California in 2002 by Anthony Wood. Wood chose the company name “Roku” as it is the Japanese word for “six”, and Roku is the sixth company that Wood founded.

64 Part of the body between la bouche and les yeux : NEZ