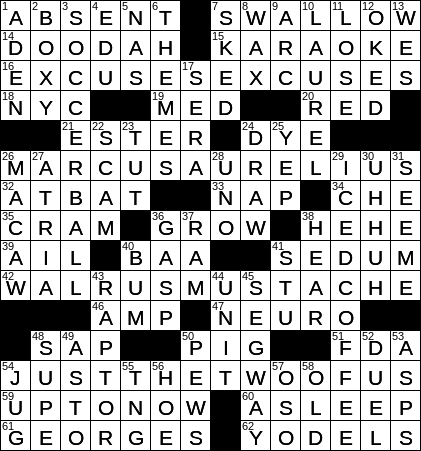 Today’s Reveal Answer: Just the Two of Us

Themed answers each include TWO incidents of letter sequence “US”:

7 Cousin of a lark : SWALLOW

Stephen Foster was a songwriter active in the 19th century who is sometimes referred to as “the father of American music”. Foster wrote some really famous songs, including “Oh! Susanna”, “Camptown Races”, “My Old Kentucky Home”, “Jeannie with the Light Brown Hair” and “Beautiful Dreamer”. Despite the success of his songs, Foster made very little cash in his own lifetime. That all went to his publishers, with the composer impoverished in the last few years of his life.

Fifth Avenue in New York is sometimes referred to as the “most expensive street in the world” as the section that runs through Midtown Manhattan is home to upscale stores such as Saks Fifth Avenue.

Twizzlers candy has been produced since 1845, although back then the only flavor available was licorice. Famously, Twizzlers come in a variety of shapes and sizes, namely Twists, Bites and Nibs. My wife is addicted to strawberry Twizzlers. Can’t stand the stuff myself …

21 Compound with a fruity scent : ESTER

Marcus Aurelius Emperor of Rome from 161 until his passing in 180. His death in 180 is generally regarded as the end of the “Pax Romana”, the long period of relative peace in the Roman Empire that started in 27 BCE. So, the death of Marcus Aurelius also marked the beginning of what came to be known as the Fall of the Roman Empire.

46 Equipment hauled by a roadie : AMP

“Just the Two of Us” is best known as a song recorded in 1981 by Grover Washington, Jr. and Bill Withers.

Yodels are snack cakes made by the Drake’s baking company. They are similar to Hostess Ho Hos and Little Debbie’s Swiss Rolls.

10 Branch of the Olympics? : LAUREL

The marvelous game Pictionary was introduced in 1985. It’s a word-guessing game that’s played in teams. Pictionary is a big hit in our house with family and friends. It must be said, a glass of wine does help boost the level of enthusiasm of all concerned …

The Raptors are the NBA basketball team based in Toronto, Ontario.

50 Benches along an aisle : PEWS