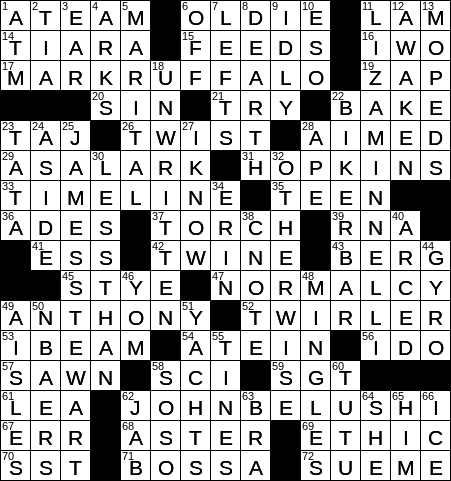 Themed answers are actors who played movie characters with with the same initials as their own:

17 Actor with the same initials as Michael Rezendes, his role in “Spotlight” : MARK RUFFALO

Mark Ruffalo is a Hollywood actor whose career really took off when he portrayed Bruce Banner/Hulk in a series of superhero films. He also gave an acclaimed performance in the 2014 biographical drama “Foxcather”, playing wrestler Dave Schultz. My personal favorite of Ruffalo’s performances is in the excellent 2015 film “Spotlight”.

Ribonucleic Acid (RNA) is an essential catalyst in the manufacture of proteins in the body. The genetic code in DNA determines the sequence of amino acids that make up each protein. That sequence is read in DNA by messenger RNA, and amino acids are delivered for protein manufacture in the correct sequence by transfer RNA. The amino acids are then formed into proteins by ribosomal RNA.

Our word “twine”, meaning “light string”, has the same root as our word “twin”. The original Old English “twin” was a double thread.

62 Actor with the same initials as Jake Blues, his role in “The Blues Brothers” : JOHN BELUSHI

A southpaw is left-handed. The term “southpaw” arose as baseball slang in the mid-1880s to describe a left-handed pitcher. Back then, baseball diamonds were often laid out with home plate to the west. So, a pitcher’s left hand would be on his “south” side as he faced the batter.

11 Actress with the same initials as Linda Marolla, her role in “Arthur” : LIZA MINNELLI

Actress and singer Liza Minnelli is the daughter of Judy Garland and movie director Vincente Minnelli. Liza won her only Oscar for her lead performance in 1972’s “Cabaret”. She has also won an Emmy, Grammy and Tony, and is one of the very few entertainers to have made that “sweep”.

“Arthur” is a fabulous film (although I can’t stand the giggly character played by Liza Minnelli). Dudley Moore (Arthur) and Sir John Gielgud (his butler “Hobson”) are the ones with the chemistry in this movie, not the romantic leads.

22 Establishment that might have a lot of hogs in front : BIKER BAR

25 Actor with the same initials as Jefferson Smith, his role in “Mr. Smith Goes To Washington” : JAMES STEWART

“Mr. Smith Goes to Washington” is yet another great film directed by Frank Capra. When the film was premiered in the nation’s capital in 1939, the list of guests included 45 US Senators. Not many of the senators liked the movie at all, and some attacked it as anti-American and pro-Communist propaganda because it portrayed corruption in Washington.

49 A wide-body plane has two of them : AISLES