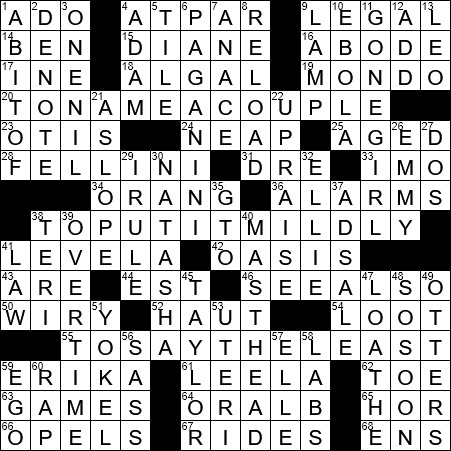 Today’s Reveal Answer: To Use an Expression

Themed answers are four-word expressions starting with “To …”. The meaning of each has been reinterpreted to suit the clue:

4 Neither above nor below face value : AT PAR

14 ___ Bradlee, editor of The Washington Post during Watergate : BEN

Ben Bradlee served as executive editor for “The Washington Post” from 1968 until 1991. Famously, Bradlee was at the helm of the paper when the Pentagon Papers were published, and when reporters Bob Woodward and Carl Bernstein investigated the Watergate scandal. His son, Ben Bradlee Jr., was the editor in charge of the Spotlight team at the “Boston Globe” when they broke the story of the Catholic Church covering up sexual abuse of children by priests. Ben senior was played by actor Jason Robards in the film “All the President’s Men”, and by Tom Hanks in “The Post”. Ben Jr. was played by John Slattery in the movie “Spotlight”.

“Mondo” is Italian for “world”.

25 Like straight bourbon, for a minimum of two years : AGED

Federico Fellini was a film director and scriptwriter from Rimini in Italy. Fellini won more Academy Awards for Best Foreign Language Film than anyone else.

Orangutans (also “orangs”) are arboreal creatures, the largest arboreal animals known to man. They are native to Indonesia and Malaysia, and live in rain forests. Like most species in rainforests these days, orangutans are endangered, with only two species surviving. The word “orangutan” is Malay, meaning “man of the forest”.

Dangerous goods are commonly referred to as hazardous materials, or Hazmat. People working with dangerous goods might wear a Hazmat suit.

42 Las Vegas was built around one : OASIS

The most famous oasis in the US is … Las Vegas, which is located in the middle of the Mojave Desert.

“Bei Mir Bist Du Schoen” was a hit in the 1930s for the Andrews Sisters. The title translates from German into English as “To Me, You Are Beautiful”. The song was originally titled in Yiddish as “Bei Mir Bistu Shein” as it was written for a 1932 Yiddish comedy musical called “Men Ken Lebn Nor Men Lost Nisht”.

Versailles is a city located just 10 miles from the center of Paris. It is famous as home to the magnificent Palace of Versailles. The palace started out as a hunting lodge built in the village of Versailles in 1624, built for Louis XIII. Louis XIII extended the lodge into a full-blown château, but it was Louis XIV who expanded it into one of the largest palaces on the planet. Louis XIV moved the royal court from Paris to Versailles starting in 1678.

55 Task for a Benedictine monk? : TO SAY THE LEAST

The majority of letters in the prefix “non-” are letters N (ens).

Niccolò Paganini was a famed Italian violinist and composer. Paganini was perhaps the most celebrated violinist of the 19th century. His most famous composition has to be his Caprice No. 24 in A minor, Op. 1. This work is the basis for many derivative masterpieces by other composers, including the wonderful “Rhapsody on a Theme of Paganini” by Rachmaninoff, and the “Variations on a Theme of Paganini” by Brahms.

Actress Ellie Kemper’s big break came with the role of Erin Hannon, a receptionist on the sitcom “The Office”. More recently, Kemper has been playing the title role on the Netflix comedy series “Unbreakable Kimmy Schmidt”.

40 It names names in a newspaper : MASTHEAD

Crayfish are freshwater crustaceans related to lobsters that indeed do look like small versions of their saltwater cousins. Crayfish are often referred to as “crawfish” and “crawdads”, especially in the south of the US.