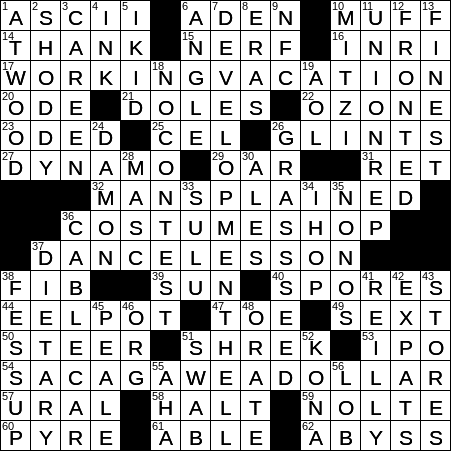 6 City on a gulf of the same name : ADEN

16 Letters on a crucifix : INRI

The letters written on the cross on which Jesus died were INRI. “INRI” is an initialism standing for the Latin “Iesus Nazarenus, Rex Iudaeorum”, which translates into English as “Jesus the Nazarene, King of the Jews”.

23 Had more than one could handle : OD’ED

32 Was patronizing, in a way : MANSPLAINED

47 Part of Michelangelo’s “David” once maliciously broken with a hammer : TOE

Sacagawea was the Shoshone guide who accompanied Lewis and Clark on their famous expedition. She was hired as a guide along with her husband, a French-Canadian trapper named Toussaint Charbonneau. When the expedition set out, Sacagawea was pregnant and had her child on the journey, in early 1805. Three years after the journey ended, Charbonneau and his family settled in St. Louis, Missouri where Sacagawea died in 1812. Sacagawea’s image is found on a US dollar coin that was first minted in 2000. The coin has a copper core clad with manganese brass, so it has a golden color.

“North Dallas Forty” is a 1979 sport drama movie about a professional footballer who plays for a fictional team that resembles the Dallas Cowboys. Nick Nolte has the lead role, portraying an aging player who relies on painkillers to continue his career. The film is based on a semi-autobiographical novel by former Dallas Cowboys wide receiver Peter Gent.

“The Handmaid’s Tale” is a remarkably well-received television adaptation of the 1985 novel of the same name by Margaret Atwood. The story is set in a future United State after a Second American Civil War. The “Handmaids” are the few remaining fertile women in the world, who are ritually raped and forced bear children by their masters.

Mitzi Gaynor’s most famous role has to be Ensign Nellie Forbush in the movie adaptation of the musical “South Pacific”. It is Gaynor who sings the song “I’m Gonna Wash That Man Right Outa My Hair”.

The telecom giant Verizon acquired AOL in 2015, and Yahoo! in 2017. Just after the latter purchase, Verizon launched Oath, a subsidiary company that served as the umbrella under which AOl and Yahoo! continued to operate. Oath was renamed to Verizon Media Group after a corporate reorganization at the end of 2018.

24 One of the Wayans brothers : DAMON

The Wayans family is known as the First Family of Entertainment as it is replete with actors, directors, screenwriters and comedians. I hate to admit it, but I don’t think I know any of them!

30 Porters may be found near them : ALES

33 ___ Sea, body of water between Borneo and the Philippines : SULU

The Sulu Sea is found to the southwest of the Philippines, and the northeast of Borneo. Gene Roddenberry named the “Star Trek” character Hikaru Sulu after the Sulu Sea.

John Kennedy Toole was an author whose most famous work is his 1980 novel “A Confederacy of Dunces”. Toole had committed suicide eleven years before publication, when he was just 31 years old. The author’s mother found a smudged carbon copy of the book’s manuscript after her son had passed, and she persisted in her efforts to get the novel published. She was finally successful in 1980, and the following year “A Confederacy of Dunces” won a Pulitzer Prize for Fiction. Well done, Mom …

Norman Vincent Peale was the author of the bestseller “The Power of Positive Thinking”. Peale was a Protestant preacher, and for decades was pastor of the Marble Collegiate Church in Manhattan in New York City. Peale also founded the nonprofit group that publishes “Guideposts” magazine.