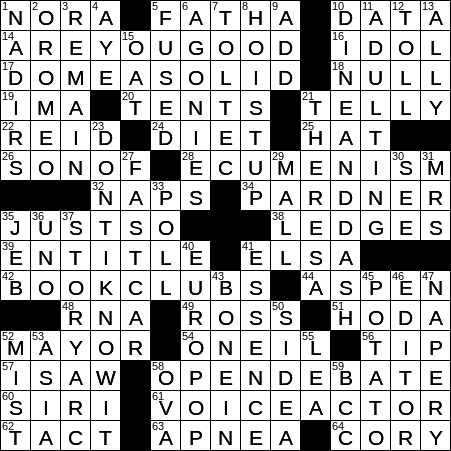 44 Western city that shares its name with a tree : ASPEN

“Boy Meets World” is a comedy-drama series that originally aired from 1993 to 2000. The main character was Cory Matthews, played by child star Ben Savage. Ben is the younger brother of another child star, Fred Savage of “Wonder Years” fame.

3 One side in the Brexit vote : REMAIN

The Aztecs viewed the Toltec people as their cultural ancestors. In the “Aztec” language, the term “Toltec” came to mean “artisan”.

21 May in England : THERESA

Theresa May won a leadership election to become UK prime minister in 2016, following the resignation of David Cameron immediately after the nation decided to withdraw from the EU (“Brexit”). As such, May became only the second female prime minister in the UK, after Margaret Thatcher.

The Mall of America (MoA) is a huge shopping center located in a suburb of the Twin Cities in Minnesota. The MoA receives over 40 million visitors each year since opening in 1992, and that’s more visitors than any other shopping mall on the planet.

Jeb Bush is the son of President George H. W. Bush, and the brother of President George W. Bush. I always thought that Jeb was an American nickname for James or Joseph but I must be wrong, because George and Barbara’s son John Ellis Bush is called “Jeb”. A kind blog reader has suggested the the name “Jeb” may have been chosen as JEB are the initials of John Ellis Bush.

37 Something that might build character over time? : STORY ARC

40 Ace of Base genre : EUROPOP

59 Include surreptitiously, in a way : BCC